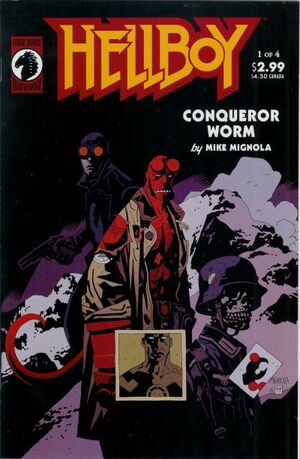 The story opens with a flashback to 1939, Hunte Castle, Austria. Lobster Johnson leads a group of U.S. soldiers in an attack on the secret Nazi Space program. The Americans arrive just as the Nazis prepare to launch a rocket carrying Ernst Oeming. The soldiers shoot the Nazi scientists and the Castle burns.

61 years later, Tom Manning briefs Hellboy and Roger on the events of that night so many years ago. Oeming, one of the best Nazi scientists, was killed in January 1, 1939. His body was taken to Hunte Castle. Then on March 20th the United States Army went to 'investigate' and the castle burned. Hellboy mentions that he heard this was the last Lobster Johnson mission, but Manning replies that 'The Lobster' was only a fictional character. NASA detected a Nazi space ship set to land in Hunte Castle, and Manning wants Hellboy and Roger to look into it. He introduces them to Laura Karnstein, their local guide, and send Laura and Roger out, so he can talk to Hellboy alone. Manning tells Hellboy that Roger, was fitted with a small bomb, just large enough to kill him. Hellboy is appalled, but Manning says that Roger must not be allowed to kill and other agents, and that Hellboy is to detonate Roger is necessary.

Karnstein, Hellboy and Roger begin the walk up to the castle. On the way they run into an old man. The man says the castle is haunted, and open his coat revealing a Nazi uniform. Hellboy, believing him to be a Nazi, hits the man, but Laura tells them she will deal the man. After Hellboy and Roger have left, she shoots the old man, who recognizes her, and pushes him off the nearby ledge. The old man stands back up, his coat blown open revealing the Lobster Claw. Laura walks ahead into the castle and them calls for help. As the approach, Hellboy and Roger are shot but sniper fire, knocking Roger off the cliff. Hellboy grabs him, but Roger lets himself drop so Hellboy can save Laura. Hellboy rushes the gun, but finds it remotely operated. He falls through the floor and finds himself in an underground room. The ghost of a U.S. soldier tells him the castle is a trap, but Hellboy climbs out of the hole only to be knocked out by Herman von Klempt and one of his war-apes. Laura stands with them and asks Klempt, her grandfather, if she did well.

Retrieved from "https://heykidscomics.fandom.com/wiki/Hellboy:_Conqueror_Worm_Vol_1_1?oldid=1435214"
Community content is available under CC-BY-SA unless otherwise noted.