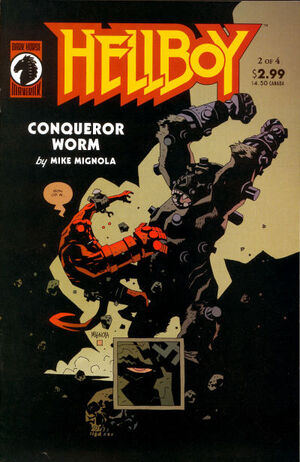 Hellboy wakes up to find Klempt and one of his Kreigaffe standing over him. Hellboy is attached to a harness and the Ape is using it to electroshock him. Klempt tells Hellboy and Laura some of his back story mentioning his meeting with Hellboy in World's Greatest Paranormal Investigator (CBG) and his small role in Wake the Devil.

Outside Roger meets up with Lobster Johnson. Johnson reveals to Roger that Laura's real name is Inger von Klempt, and that Herman was the only survivor of the Hunte Castle Disaster. The two enter the caves under the castle, and find a room full of Nazi created humanoid machines. Feeling Rogers electric power, they begin to come to life and fight Johnson. Roger absorbs the power out of the Nazi generator depowering the machines and leaving the castle without power.

Without electricity to shock him, Hellboy is able overpower the Kreigaffe. As he walks away he sees a man shoot and chained up. He man says he was there at Hellboys birth[1] and watched him in St. Leonard's Wood ("The Nature of the Beast"). The man explains that ancient evil beings exist in space and that one of these creature will return to earth with the Nazi space ship, and gives Hellboy a small device that can trap the creature. The man dies, transforming back to his true form, an Alien (like those seen in Seed of Destruction #4). Roger meets up with Hellboy, but the Lobster is no where to be seen. The two heads to stop Klempt as the said villain and his followers awaits Doctor Oeming's return.

Retrieved from "https://heykidscomics.fandom.com/wiki/Hellboy:_Conqueror_Worm_Vol_1_2?oldid=1435215"
Community content is available under CC-BY-SA unless otherwise noted.