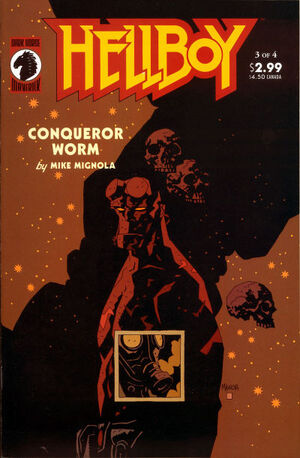 Klempt tells Inger, his granddaughter, to put on a gas mask as the Nazi space capsule lands in the castle. Gas streams out of the ship and begins to transform the men working in the castle. Inger relpies what is happening and begins to regret helping Klempt. Hellboy and Roger enters the scene and Klempt attacks Hellboy, leaving Roger to deal with the capsule. Lobster Johnson appears and tells Roger that he must face the monster alone. The men, now completely turned into reptile like creatures, jump Roger.

Inger flees, but is stopped by the ghosts of German soldiers. Hellboy knocks off Klempt's 'head' and reveals his real head in a jar within his body. The head shoots Hellboy and flies off, as Hellboy falls through the floor onto the basement below. The monster, the Conqueror Worm, emerges from the ship, and devours the transformed men. Inger confronts Klempt, and asks how he will control the monster. Kelmpt responds that nothing can control the Worm, and that his only goal was to destroy the world. The worm will destroy the world, and tell the others of its kind. The 369 Ogdru Hem will then awaken followed by the the Ogdru Jahad. They will then reduce the world to “a blackened cinder.” Inger takes off her gas mask to reveal that she too has turned into a reptile creature.

Retrieved from "https://heykidscomics.fandom.com/wiki/Hellboy:_Conqueror_Worm_Vol_1_3?oldid=1435216"
Community content is available under CC-BY-SA unless otherwise noted.