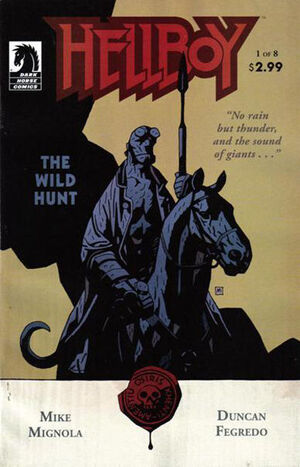 Following the events of Darkness Calls, Hellboy has been in Italy, with two sisters. While there he dreams.

Hellboy is in a clearing watching the funeral of King Dagda. He is told that Dagda was the last king of the Tuatha de Danann, and that soon all of his kind will leave the world forever. Hellboy sees Alice Monaghan, who last appeared as a baby in "The Corpse," but wakes up.

The sisters give Hellboy a letter, and we see that the sister, like Harry Middleton from Darkness Calls, are in fact dead. The letter is from the Osiris Club, and Hellboy promptly heads back to England. In a ruined building he meets three men from the club. They say it has been hard keeping track of him, and briefly recount his adventures from The Island to Darkness Calls. They tell Hellboy that from time to time giants rise from their graves and that a hunt is setup to kill them again. This time six have appeared. They invite Hellboy to join them on the hunt, and he agrees.

Elsewhere in England, Gruagach has taken the box to the top of a hill in the midst of the fey creatures. He says that when the time is right the Queen will speak to the assembled army and gather a great host.

The hunt charges out on horseback to a bridge. One of the men in the hunt impales Hellboy on a spear and he tumbles into the river. The hunt master tells Hellboy that he should not have returned, and that a Demon will never sit on the throne of England. He then activates the spear and it electrifies Hellboy.

Retrieved from "https://heykidscomics.fandom.com/wiki/Hellboy:_The_Wild_Hunt_Vol_1_1?oldid=1435230"
Community content is available under CC-BY-SA unless otherwise noted.