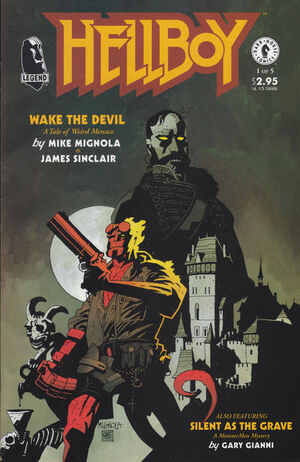 The comic opens on the northern coast of Norway, inside the Arctic Circle, where a Zinco helicopter is landing in front of the castle that was seen as the end of Seed of Destruction. The head of the company, Roderick Zinco, breaks into the castle and is confronted by Karl Kroenen, Ilsa Haupstein and Leopold Kurtz but Zinco explains that he saw Grigori Rasputin on his private beach and left behind the words "Ragna Rock" and disappeared, Zinco promises them that they can use anything he has.

One year later, in SoHo, New York City Ilsa Haupstein kills the curator of a wax museum. At the B.P.R.D Headquarters in Fairfield, Connecticut, Tom Manning and Kate Corrigan brief the agents about the life of Vladimir Giurescu and the fact that he could never die because when the full moon shines down on him at Castle Giurescu he heals himself. In 1944, Heinrich Himmler proposed project Vampir Sturm and a Nazi delegation, led by Ilsa Haupstein was sent to recruit Giurescu, after meeting with Hitler, Hitler ordered the arrest and execution of the Giurescu family. They revealed that the museum curator, Howard Steinman, real name Hans Ubler, could have smuggled Giurescu's body out of Germany before his corpse was burnt and that someone could have the intention to take the corpse to Castle Giurescu to re-animate his corpse, but there are three possibilities as to where Castle Giurescu is, so Tom Manning splits them up into three groups. Hellboy on his own, Clark with Abe Sapien, and Bud Waller with Liz Sherman and Leach.

In Romania, Isla Haupstein opens the stolen box with Giurescu's corpse in it and orders the soldiers to take it to a specific room. Meanwile, in Norway, Kurtz and Kroenen watch Ilsa and it is revealed that they are maufacturing their own army. Back in Romania, The agents are all in a plane where Abe Sapien talks to Hellboy about the involvement of the Ragna Rok Project because he thinks it's worrying Hellboy. Hellboy jumps out the plane with a jetpack which explodes when he tries to click it and Hellboy lands in the same castle that Ilsa Haupstein is in.

Retrieved from "https://heykidscomics.fandom.com/wiki/Hellboy:_Wake_the_Devil_Vol_1_1?oldid=1559903"
Community content is available under CC-BY-SA unless otherwise noted.