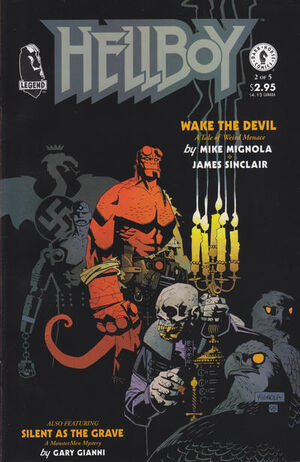 Ilsa orders Unmensch, a cyborg Nazi, to kill Hellboy and they fight until they both fall through the floor. A flashback to Tarmagant Island, 1944 shows Rasputin ordering Ilsa, Kroenen and Kurtz to go to Norway. In the present, Rasputin appears and tells her to leave the castle and that the next time she sees Giurescu that he will be young again. In the castle, Hellboy wakes up with the Nazi gone, leaving behind only his metal arm.

In a near-by village, an old man tells his daughter to leave with her children and to never come back and that it is "too late" for him to leave.

Hellboy follows a trace of blood and finds a man eating the Nazi's leg and reveals that he is Vladmir Giurescu's father and that the goddess Hectate, is the who brings Giurescu back to life because he is her son. When Hellboy asks where Giurescu is, the man refuses to tell him and Hellboy burns him to death. When Hellboy leaves the room he remembers the old man said something about a moon door and sees a door with a moon shape on it, and inside is the box with his corpse in and the three soldier's heads in front of it. But he is surrounded by ravens who turn into the Women of Thessaly and start attacking him.

Retrieved from "https://heykidscomics.fandom.com/wiki/Hellboy:_Wake_the_Devil_Vol_1_2?oldid=1435239"
Community content is available under CC-BY-SA unless otherwise noted.