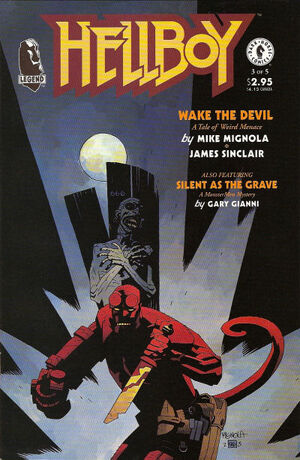 At Castle Giurescu, Hellboy is shooting the Women of Thessaly until Giurescu comes out of his box and when Hellboy tries to kill him, Giurescu turns into a raven and Hellboy stabs him. He falls into a stone coffin and ends up underground, when Hellboy gets there Giurescu is on the floor with the knife in his chest but then he turns into snakes and gets away, when Hellboy leaves the tomb, Hectate brings then Giurescu back to life. Rasputin tells Isla about his life and offers Ilsa Haupstein to be reborn, like he was.

In the ruins of Czege Castle, Romania, Liz Sherman, Bud Waller and Leach find a door which Leach opens because he can detect the hinges as he is a human metal detector. They find a huge room with a dead homunculus inside. Liz touches a hole in his chest which she can't let go of and the homunculus comes to life because Liz is transferring her energy into him. Bud shoots her arm to get her to let go of him and the homunculus panics and snaps Bud Wallers neck then escapes.

In Norway, Roderick Zinco has a head in a jar, who is revealed to be Professor Herman Von Klempt, which Kroenen asked him to find because he thinks that he should be one of them. In Romania, at The Monastery of St. Bartholomew, Stephen, the old man from issue 2 tells his brother, a priest, that the town will go back to its "old ways" because he can sense Giurescu but his brother doesn't believe him. Back at Castle Giurescu, Hellboy finds a room full of explosives and sets a timer for them to go off in one hour.

Retrieved from "https://heykidscomics.fandom.com/wiki/Hellboy:_Wake_the_Devil_Vol_1_3?oldid=1559906"
Community content is available under CC-BY-SA unless otherwise noted.