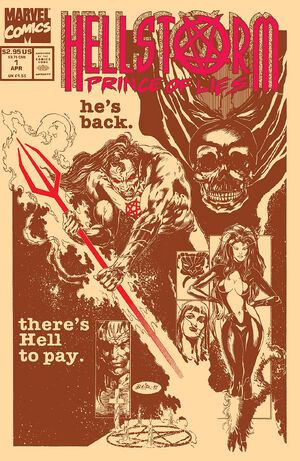 The Black School is a school consisting of clergymen studying the black arts allegedly from Satan (Earth-616). Gabriel Rosetti was made aware of the school, who later decided to stop it.

During a sacrificial rite to Satan by the Black School, Gabriel fought the head priest to prevent the sacrifice, and he was surprised to discover that the head priest is none other than Daimon Hellstrom (Earth-616). When Gabriel was overpowered and Daimon tried to finish the sacrifice, the real Daimon Hellstrom (Earth-616) then appeared and fought the fake son of satan.

As it turns out, the faux Daimon was actually a minor demon who escaped hell, and Satan needed his son to help him in bring the escaped demon back to hell, which the real Daimon was able to do using his hellfire trident. This led to the ire of Seripha Thames (Earth-616) who was the wife of the faux Daimon. She blamed the real Daimon for killing her husband, the impersonating Demon.

Retrieved from "https://heykidscomics.fandom.com/wiki/Hellstorm_Vol_1_1?oldid=1732381"
Community content is available under CC-BY-SA unless otherwise noted.