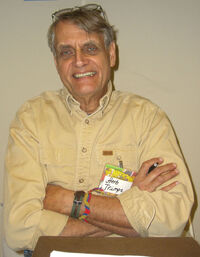 He is the husband of writer Linda Fite.

Herbert "Herb" Trimpe is an American comic-book artist and occasional writer, best remembered for his work on The Incredible Hulk and credited with the co-creation of the X-Men's Wolverine in the early 1970s.

Trimpe joined Marvel Comics in 1967 and stayed until 1996. He was laid off when Marvel went bankrupt, went back to school for his master's degree, and taught art at a rural middle/high school for two years. He occasionally takes on comic-book projects.

Recognition for his work includes a nomination for the Shazam Award for Best Inker (Humor Division) in 1973, as well as Humanitarian of the Year Award at the San Diego comic convention in 2002, for his work as a chaplain at the World Trade Center site after 9/11. He lives in the Hudson Valley of New York.

Herb Trimpe has participated in an upcoming documentary film called Adventures Into Digital Comics. The film discusses, among other things, the crash of the comic book industry in the 90s and the emergence of webcomics.