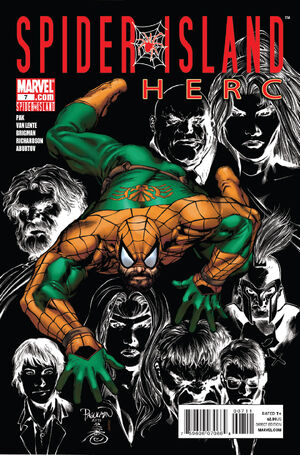 Appearing in "Spider-Story (Part 1 of 2)"Edit

You loved it when Herc dressed up as Thor, but can you handle the senses-shattering debut of... THE INCREDIBLE SPIDER-HERC?!?! And versus... THE X-MEN??? Though he is the newly self-appointed protector of Brooklyn, when a rash of unusual occurrences begin breaking out in Manhattan, Hercules finds himself ""infested"" with Spider-Powers of his own. Unfortunately, our web-slinging former demigod soon finds himself under the thrall of the insidious intelligence behind Spider Island and in a duel to the death against fellow champions The X-Men. Greg Pak and Fred Van Lente join up with artist June Brigman to deliver a pulse-pounding, wall-crawling [!!!] adventure with Marvel's lovable lug, HERC!

The Cover is a homage to Amazign Spider-Man #100

Retrieved from "https://heykidscomics.fandom.com/wiki/Herc_Vol_1_7?oldid=1649318"
Community content is available under CC-BY-SA unless otherwise noted.