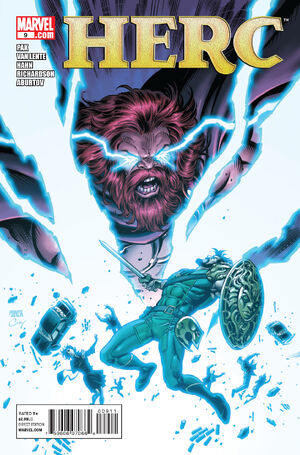 AN ELEKTRA-FYING ISSUE OF HERC! Herc has rejected his demigod status to distance himself from his Olympian ties, especially his father Zeus. Unfortunately for Herc, that distance is about to get a lot shorter, as Zeus has decided to move in with his wayward son after an angry Hera de-powers him. As if parental baggage wasn’t problematic enough, Herc’s status as Brooklyn’s protector has put him at odds with some powerful enemies. A team-up with the skilled assassin Elektra could give him the help he needs… as long as his dad doesn’t muck it up first. Written by Marvel scribes Greg Pak and Fred Van Lente and drawn by the astounding David Hahn, it’s a Herc story not to be missed!

Retrieved from "https://heykidscomics.fandom.com/wiki/Herc_Vol_1_9?oldid=1732803"
Community content is available under CC-BY-SA unless otherwise noted.