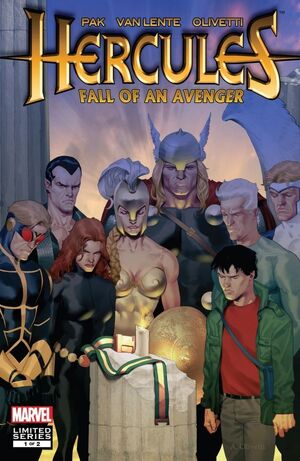 Appearing in "Hercules: Fall of An Avenger, Part 1 of 2"Edit

When the most beloved Olympian of all time falls, who will mourn him? Acclaimed INCREDIBLE HULK artist Ariel Olivetti joins writers Greg Pak and Fred Van Lente for a two-part mini-epic that marks the end of an era and the beginning of something utterly unexpected for Hercules, the Lion of Olympus. Bring your hankies -- and your golden adamantine maces -- as an all-star cast including Thor, Namor, Namora, Snowbird, Alflyse, Bruce Banner, and of course, Amadeus Cho send off the Son of Zeus with shocking tales, smash-tastic action, bawdy tomfoolery, and heart-rending drama that will change the course of Marvel's marvelous mythological milieu... forever! Plus: There are some missions that require a woman's touch- so the rest of the Agents of Atlas hang back and let Venus and Namora go out and show their stuff!

Retrieved from "https://heykidscomics.fandom.com/wiki/Hercules:_Fall_of_An_Avenger_Vol_1_1?oldid=1727971"
Community content is available under CC-BY-SA unless otherwise noted.