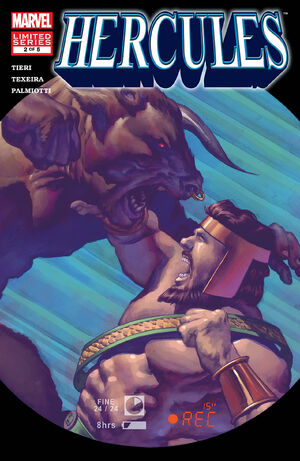 Appearing in "The New Labors of Hercules, Part 2"Edit

Synopsis for "The New Labors of Hercules, Part 2"Edit

Hercules is dragged before Eurystheus, who recounts his history and how he came to live again. He feels ashamed that his defeat at the hands of Hercules, since Hercules himself has fallen so low. He wants Hercules to perform twelve New Labors so that he will be viewed as a hero again. The hero that people at one time built monuments to, and sang songs about. Hercules accepts the challenge and leaves to prepare. Meanwhile, a very swiftly moving man runs into the Olympus Group building on Wall Street, and announces the intentions of Hercules to perform new labors. Needless to say, the CEO, Zeus, is not pleased.

Retrieved from "https://heykidscomics.fandom.com/wiki/Hercules_Vol_3_2?oldid=1754131"
Community content is available under CC-BY-SA unless otherwise noted.