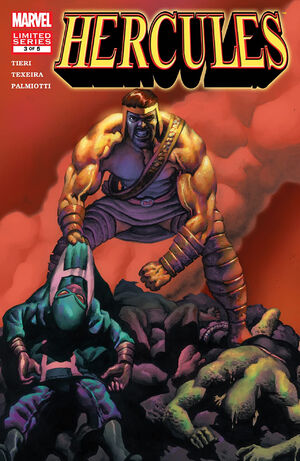 Appearing in "The New Labors of Hercules, Part 3"Edit

Synopsis for "The New Labors of Hercules, Part 3"Edit

Hercules goes through the the first seven of his twelve labors. He must capture a sabretooth tiger, defeat HYDRA, capture Lockjaw from the Inhumans, defeat Dragon Man, drive the hordes of Attuma from Atlantis, and overcome the Red Skulls' "Dust of Death", and defeat the Abomination. Having actually bungled his way though the first seven, Hera revises the final five tasks.

Retrieved from "https://heykidscomics.fandom.com/wiki/Hercules_Vol_3_3?oldid=1432505"
Community content is available under CC-BY-SA unless otherwise noted.