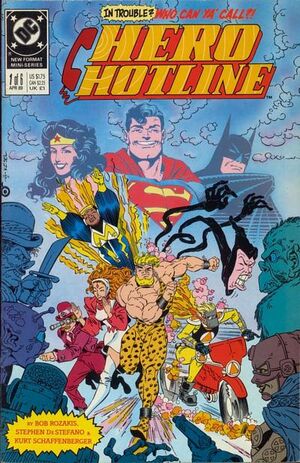 Microwavabelle reports to work where Ms. O'Flaherty, a newspaper reporter, is waiting. Microwavabelle tells her about Hero Hotline.

Stretch is assigned to retrieve an engagement ring, dropped down a sewer. He takes Private Eyes with him and together they collect it and return it to the owners. They tell the heroes they dropped it during an earthquake which occurs again. Private Eyes identifies the source of the earthquake as coming from within an adjacent building but is unable to see inside due to lead-based paint on the walls. Stretch slips between cracks in the door.

Mister Muscle has been assigned to visit a battered wife named Mrs. Bartoli. He brings her literature and listens as she recounts her and her husband's early days. Mr. Bartoli returns drunk and accuses his wife of having an affair. He attempts to hit her again but Mister Muscle grabs his arm, hurting him, and threatens to return if Mr. Bartoli strikes his wife again.

Voice-Over and Fred are assigned to meet with Mrs. Culligan, an elderly woman who reports three-foot tall Martians visiting her every night. Voice-Over barely contains his amusement but leaves Fred to spend the night as look-out.

Stretch enters the building and spots supervillain Quakemaster who is trying to recover stolen money which he had previously buried before the building was erected. The Coordinator sends all available heroes to the scene and they fight Quakemaster. Although Diamondette manages to break his jackhammer, Quakemaster is still able to fight them all. Stretch realizes that Quakemaster's exo-skeleton is augmenting his strength and resistance. All the heroes hold Quakemaster immobile while Diamondette shatters his armor. Mister Muscle is then able to knock him out. The heroes return him to Hero Hotline HQ where the police are summoned to take him into custody.

Stretch is assigned to rescue a cat from a tree and the rest of the crew go home for the night.

Retrieved from "https://heykidscomics.fandom.com/wiki/Hero_Hotline_Vol_1_1?oldid=1433975"
Community content is available under CC-BY-SA unless otherwise noted.