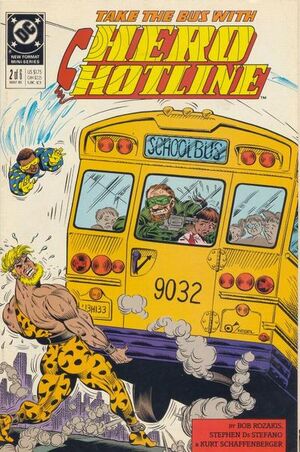 Appearing in "Take the Bus with Hero Hotline"Edit

Synopsis for "Take the Bus with Hero Hotline"Edit

At 9:25 the next morning, Hot Shot is dragged into the office by his mother who is upset that Hot Shot has been assigned to the night crew.

Fred, meanwhile, reports to Voice-Over, and the Coordinator, that he fell asleep while staking out Mrs. Culligan's house. When he awoke, Mrs. Culligan was missing. The Coordinator orders them both to try to find her. While searching the house they find an alien-looking gun.

The rest of the crew watch a breaking news story of a group of masked gunman, called the United Fighters for Freedom, which have hijacked a school bus and are holding the children hostage until their demands are met. Microwavabelle spots one of her kids on the bus and begins to leave when the Coordinator orders her to stop fearing her involvement will escalate the situation. She reluctantly agrees but watches the developing events very closely.

Stretch is assigned another cat stuck in a tree case and calls his daughter, Eloise, to postpone their lunch meeting. He goes to the address only to find a large number of trees and the child is unaware in which tree the cat is. Stretch requests Private Eyes' help but Private Eyes is being assigned to a new case. After searching, Stretch calls his daughter and reschedules their get-together for dinner at seven. Eventually the cat is found, sleeping in a box in a garage all the time.

At 10:47 Ralph Bartoli and his lawyer, Eric F. Schuster, arrive to file a lawsuit against Mister Muscle and the Hero Hotline. Mr. Bartoli has his arm in a sling but is seen repeatedly waving and pounding it in anger. They soon leave.

Private Eyes is spending time with his fiancee, Melanie, when he is assigned to help locate a missing will. As he is leaving, the situation with the gunman and school children escalates and Microwavabelle, unable to stand idly by any longer, heads to the scene. The Coordinator orders Diamondette, Mister Muscle and Private Eyes to the scene.

Microwavabelle arrives prompting her daughter, Ruthie, to proclaim "It's my mommy" which is overheard by one of the gunmen. She grabs Ruthie and hands her over to her colleague, Joey, who holds her at knifepoint. Microwavabelle disarms him but the woman pulls out a grenade and threatens the rest of the kids. The police try to restrain Microwavabelle and, while all the attention is on her, the rest of the heroes act. Diamondette slices through the bus and Mister Muscle pries it open allowing the kids to begin to exit. The woman again threatens to use the grenade but Private Eyes discovers that it is a fake. The heroes take the criminals down.

Private Eyes goes to his appointment to search through dozens of boxes and stacks of paper to look for the will. Eventually he finds it.

At 3:40 Microwavabelle returns to the office, with her kids in tow, where the Coordinator begins to criticize her for her actions. Daughter Naomi, instead, chastizes the Coordinator who agrees and allows the family to leave for the day. Before they can leave, Voice-Over and Fred return with the alien gun but Dwight identifies it as a toy.

Retrieved from "https://heykidscomics.fandom.com/wiki/Hero_Hotline_Vol_1_2?oldid=1433976"
Community content is available under CC-BY-SA unless otherwise noted.