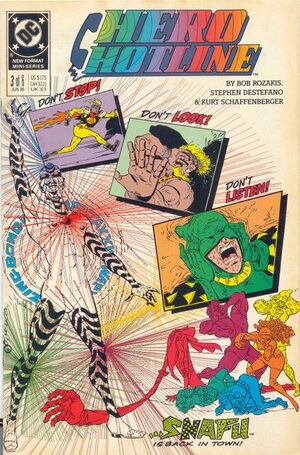 Appearing in "SNAFU is Back in Town"Edit

Synopsis for "SNAFU is Back in Town"Edit

At 9:07 Microwavabelle brings her children to work as they have no school and she couldn't get a babysitter. As such, she is assigned to show new employee Terry Carbone, a.k.a. Lightning Eyes, around the office on his first day.

Because Mrs. Culligan has now been missing for "a full week", the Coordinator assigns Private Eyes to assist Voice-Over and Fred in finding her. Private Eyes identifies some dirty tracks which, with Soozie-Q's assistance, is identified as likely coming from a basement. Private Eyes uses his x-ray vision to find Mrs. Culligan. They go downstairs but quickly hide when they hear others approaching. Mrs. Culligan is approached by two young girls in Martian make-up who appear to be scheming her out of her money. Voice-Over and Private Eyes scare the two into thinking they're also being attacked by aliens and scare them off.

Mister Muscle gets a call, implied to be from Ralph Bartoli, where they decide to meet at eight p.m. to settle their differences out of court.

Stretch is assigned another cat stuck in a tree and also finds the cat's owner.

Diamondette gets a call from Alberto Rosario asking her to open Pandora's Box on national television later that morning. The Coordinator gives her the day off. At 10:30 she appears on the show and opens the box but the show is interrupted by a news announcement that super-villain SNAFU is causing havoc at the Stock Exchange. All available heroes converge and take on the villain. Voice-Over sneaks up behind SNAFU and uses his speakers' amplifiers to overpower SNAFU with noise that knocks him out.

Back on Alberto's show, it is revealed that Pandora's Box was empty.

The heroes return and Melanie arrives to take Private Eyes home to rest.

Stretch is assigned to rescue a child stuck in a well and manages to do that without most of his body leaving the office. After chastizing the parents and the media, Stretch also takes the rest of the day off. Voice-Over seems to have lost his voice implying he, too, will leave early.

At 8 p.m., Mister Muscle goes to meet Ralph and is almost struck by shadowy figure weilding a monkey-wrench. Mister Muscle disarms the person who runs away with Mister Muscle threatening him.

Retrieved from "https://heykidscomics.fandom.com/wiki/Hero_Hotline_Vol_1_3?oldid=1433977"
Community content is available under CC-BY-SA unless otherwise noted.