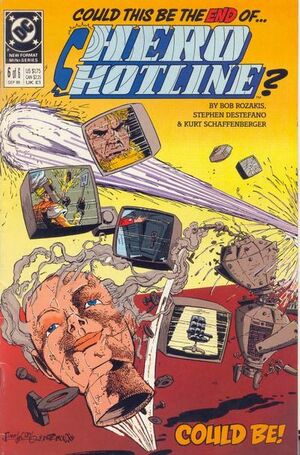 Appearing in "Could This Be the End of Hero Hotline? Could Be!"Edit

Synopsis for "Could This Be the End of Hero Hotline? Could Be!"Edit

At 9:27 Microwavabelle gets a phone call about her daughter and leaves in a huff. When she gets to the address, which appears abandoned, Soozie-Q's monitoring screen malfunctions.

Fred gets a call from Alberto Rosario inviting him on the show that day and Fred leaves.

At the trial Mrs. Bartoli testifies that Ralph made numerous calls to Hero Hotline to verify that Mister Muscle would meet with him. The Coordinator, who has been monitoring the trial, orders Soozie-Q to search the Bartoli's phone records and finds a call to Eric Schuster. Stretch informs Ellie via a note he delivers and Ellie calls Mr. Schuster to the stand. Mr. Schuster provokes Mister Muscle who threatens him leading to a brief altercation.

Meanwhile Diamondette and Private Eyes are sent to help open a safe with a broken lock. As soon as they leave, the remaining men in the office start planning Private Eye's bachelor party. Once Diamondette opens the safe, Soozie-Q's monitor on them fails.

Hotshot is sent to a luncheonette with a power outage to cook their rapidly thawing burgers. Upon entering the building, Soozie-Q's monitor goes out.

Voice-Over is sent to an apartment where a resident has been hearing strange sounds in the walls. As he enters, the monitor on him fails as well.

The Coordinator deduces what has happened to Ralph Bartoli and gives Stretch some questions to ask Ellie. He goes to the court. Ellie asks Schuster about his exorbenant fees and his feelings when he learned that Ralph decided to settle out of court. She accuses him of going over to the Bartoli's after the phone call, angry about losing the fee, and confronting him - a confrontation that got physical and resulted in murder. Mrs. Bartoli stands up and admits that Schuster killed Ralph and threatened her to testify against Mister Muscle. With that, the charges against Mister Muscle are dropped and Eric Schuster is arrested.

The Coordinator asks Soozie-Q where all the heroes are and she plots their locations - their all in the same block, an area abandoned and soon to be razed. The Cooridnator, expecting a trap, orders Stretch and Mister Muscle to rescue the others. Soon, the Calculator arrives and reveals he had been responsible for the various attempts. He had calculated the odds of him defeating all the heroes and opted instead to lure all the heroes into various traps. Just then the heroes return and capture him.

At 10:30 Alberto's show comes on but Fred develops stage fright and is unable to speak.

Retrieved from "https://heykidscomics.fandom.com/wiki/Hero_Hotline_Vol_1_6?oldid=1433980"
Community content is available under CC-BY-SA unless otherwise noted.