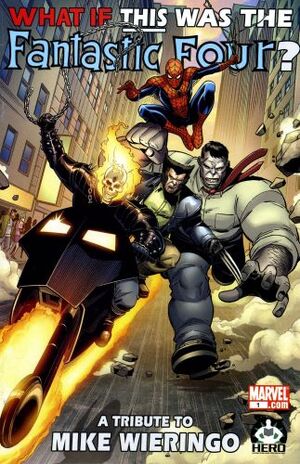 Appearing in "All Possible Worlds"Edit

Synopsis for "All Possible Worlds"Edit

With the Fantastic Four having been killed by De'lila in this reality- with the exception of Franklin Richards and the now-human Ben Grimm-, Captain America suggests at the FF's funeral that the new FF assembled by De'lila take their place. Although Wolverine and the Hulk consider the suggestion a bad idea given that they were brought together by the original team's murderer, Grimm assures them that he feels they have what it takes to be the new team, transferring the old team's financial information to the new group before he departs to raise Franklin away from all this.

Although the team pass their first test by defeating the Super-Skrull, their aggressive methods incite further controversy. Following a confrontation with Blastaar while experimenting with Reed Richards's old equipment, Wolverine notes that the new team will be up against both the FF's old rogue's gallery as well as their own enemies, prompting Ghost Rider to contemplate resignation due to his formidable opponents.

Learning of the FF's demise, Doctor Doom, outraged at being cheated of his revenge, begins to plan revenge against the new team with a partner, recognising that the chaotic nature of the new group means that purely scientific methods will not work. Brought together by Doom and his partner, a new Frightful Four attack New York, consisting of Sandman, Abomination, Venom and Sabretooth, Ghost Rider swiftly noting that they are possessed and empowered by new demonic energies. Although their foes disintegrate during the battle, Doom subsequently appears to confront the team, revealing that he has been possessed by Mephisto as the two work together to destroy the team before their chaotic imbalance can affect Mephisto's realm.

Despite the odds against them, Spider-Man is able to disrupt Mephisto's control of Doom using a Skrull disruptor, the resulting attack destroying Doom and Mephisto, Doom briefly thanking Spider-Man before the device claims him. With the public having witnessed the new team's victory, they are met with public acclaim, the Watcher noting that, although some worlds have the best of humanity falling too soon, in the best of all possible worlds their legacies inspire others to take up the challenge and become better than they were.

Retrieved from "https://heykidscomics.fandom.com/wiki/Hero_Initiative:_Mike_Wieringo_Vol_1_1?oldid=1451043"
Community content is available under CC-BY-SA unless otherwise noted.