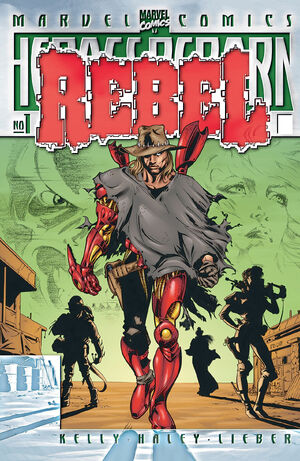 The states of California and Navada have been rechristened as Calivada, under the rule of Master Man and his religious cult. NEar the Tabernacle where Master Man's Acolytes are herding normal folk for conversion, Rebel O'Reilly clashes with the gamma mutated Crossbones, a loyal follower of Master Man. Searching for the love of his life, a woman named Blue Skye, Crossbones spouts off religious rhetoric instead of her location and Rebel blasts him to bits. THis is before Guinness his fellow hired gun, Pepper Potts and Michka Rose, two resistance fighters attempting to overthrow Master Man's regime who have hired on Rebel and Guinness to help them.

At the headquarters of Master Man, the former Nazi-come religious zealot is furious over the attacks made by Pepper Potts and her band of rebels and orders his Acolytes to destroy them, crushing one of their necks in utter insane rage. While out in the wilderness, the rebels camp out for the night and Pepper begins to lose her temper at Rebel and Guinness' "cowboy" ways and eventually becomes frustrated and ends the conversation. That night, Rebel has a dream about Blue Skye and the love they had together when he's woken up by Guinness in the morning. Guinness confronts his comrade about the fact that Rebel is purposely leading them on a wild goose chase to find his long lost Blue Skye, and asks him to drop everything warning him that not only will he blow this gig but he'll lose the love of Michka Rose who has taken a liking to him.

Pepper and Michka are out stalking a Acolyte camp, and Michka uses her singing voice to incapacitate the men on guard there. Always plugging her ears, the curious Pepper asks the mute what she sings about, Michka writes "a man, a betrayal" in the sand and answers no further because they are ambushed.

Sometime later, Rebel and Guinness track down the girls and find that they are captive of one of Master Man's most loyal minions, the Parson. As Guinness goes to Pepper's aid he learns that Michka has betrayed them, while Rebel clashes with the Parson. In their fight, Parson mocks Rebel for his lack of faith, abandoning their cause and "poisoning" Blue Skye, all accusations that anger Rebel and he denies. Parson has the upper hand until Michka attacks him and Rebel is completely overwhelmed by the fact that her song is about her love of him. The Parson then strikes her down with a fire bolt seriously injuring her. When the Parson tells Rebel to repent and be re-baptized into the group, he tears off his serape and blasts the Parson at point blank with the chest piece of his Prometheum Armor seriously injuring him. Rebel is about to kill Parson when he bargains his life in exchange for the location of Blue Skye. Rebel takes the information, however the Parson warns him that she will not be staying there for long and teleports away.

Rebel abandons his friends to get Michka to medical attention on their own and rushes off to the location that the Parson provides them. Opening the door he finds that Blue is not there, just a boy resembling him with a sign tied around his neck reading "Yours".

Retrieved from "https://heykidscomics.fandom.com/wiki/Heroes_Reborn_Rebel_Vol_1_1?oldid=1433899"
Community content is available under CC-BY-SA unless otherwise noted.