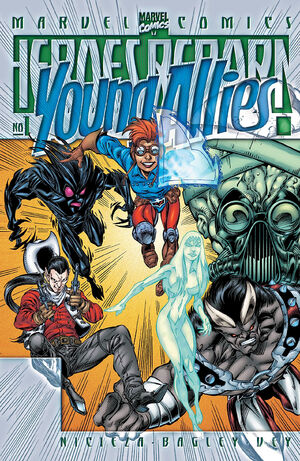 Elric Whitemane the outlaw known as Kid Colt attempts to escape from an armed team of SHIELD commandos who are trying to take him back into custody. Whitemane manages to give them good chase in his Kymaliean form, however they manage to corner him. All is not lost as Bucky and her sidekick Toro come to Kid Colt's rescue and easily defeat the SHIELD soldiers. With the battle over Whitemane turns into his humanoid form and learns that Bucky and Toro are part of a group of super-heroes called the Young Allies and have come to ask him to help them as they need a teleporter to help them get to Europe. When Kid Colt is surprised they have come to him because he can't teleport, they tell him that they have a friend who can teach him how to and he agrees to join the group.

This person, is I.Q., a teenage mutate that has has the full control of a World Party science lab where he's spent his entire life living in a bio-tank that keeps him alive. I.Q. is the Young Allies strategist and communicates with them telepathically. He learns that the Allies were successful in the second phase of Operation: Purgatory and waits until they can begin the next phase of their operation. While on Muir Island, British North Sea oil and Energy Cartel CEO Leland Walker is attempting to harness a newly found form of energy dubbed Rip Energy for exploitation, an energy source that they have contained since it fell and completely decimated Paris, France.

While in Philidelpha, the Young Allies arrive at their headquarters: the home owned by Bucky's grandparents Richards and Peggy Barnes. The group relaxes while Bucky checks in with I.Q. to learn of the next phase of their plan. I.Q. then establishes a psi-link with Kid Colt and learns his origins as a human/Kymellan hybrid created by SHIELD and teaches him how to teleport. I.Q. then in turn explains his origins that he was a super-powerful psi, even at birth who was taken into the control of the World Party who sought to exploit his power. At an early age however he took control of all the scientists experimenting on him and erased all the World Party's records of him and began plotting against them. Learning of Bucky's Young Allies he had since offered his remote assistance to the group.

The group then teleport to Muir Island to try and prevent Leland Walker from attempting to absorb Rip energy into his body. They arrive too late and witness as Walker absorbs the power and becomes supremely powerful in an attempt to use the power to save the world. I.Q. informs the group that the Rip energy is actually a living entity and that Lelands interface with it threatens to destroy this life form. Finding this wrong the group attempts to stop Leland before he can kill the sentient energy source, leading to a clash between him and the Young Allies.

Kid Colt opens a spatial anomaly to block the flow of Rip energy to Leland giving the energy the chance to become whatever it wants to be. It suddenly flies out of the anomaly and bombards Walker, killing him and transforming into two unique entities: The male energy being known as Kaos, and the female Order. The both explain that their mission is to watch over humanity on Counter-Earth and determine if they are to live or die. The Young Allies decide that it's best to keep tabs on these beings, and dubbing them "O" and "K" they invite them into joining the Young Allies.

Retrieved from "https://heykidscomics.fandom.com/wiki/Heroes_Reborn_Young_Allies_Vol_1_1?oldid=1433903"
Community content is available under CC-BY-SA unless otherwise noted.