Start a Wiki
Part of the 'Siege of Wundagore' story arc 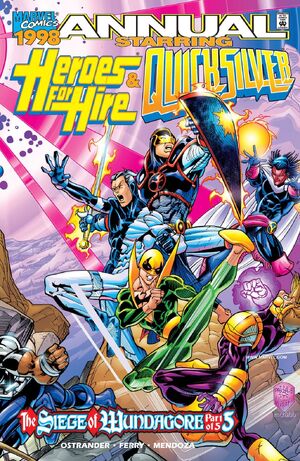 Appearing in "The Final Conflict"Edit

Synopsis for "The Final Conflict"Edit

The Siege of Wundagore, part 5

Lord Delphis, the scientific member of the Knights of Wundagore, arrives on Earth in a vessel borrowed from Arkon, rule of the dimension he was helping to save. He approaches Wundagore to see utter chaos; various Acolytes, devolved Heroes for Hire, a god-like High Evolutionary, felled Exodus, Quicksilver with the Isotope E sceptre in hand and his fellow Knights ready for battle upon their atomic steeds.

The High Evolutionary, mad with power, orders Sir Ram to bring down the alien ship. Ram fires upon the ship with his power lance, bringing it crashing down. Pietro is able to rescue Delphis from the crash and delivers him to Bova who explains the events that have transpired.

Bova continues to fill Delphis in, highlighting the deception played by Man-Beast. Man-Beast is alive near the conflict, not killed by the explosion in the caves and does not see White Tiger stalking him.

The Heroes and remaining Knights battle, with the Heroes taking the upper hand. Delphis decides to help the Evolutionary by helping to stabilize him, rather than fight on his side.

Thena frees Iron Fist so he can protect her, Man-Beast and Exodus while they form their "uni-mind" to defeat the Evolutionary.

Bova begs Quicksilver to stop and hand over the Isotope to Delphis so that he may stabilize it and use it to save the Heroes and Evolutionary. Quicksilver is unwilling to give up his added power, but Bova makes him realize how like Magneto he's become while in the possession of this great power. He hands the sceptre over to Bova who goes to help Delphis in the lab.

The Acolytes are leaving, but Amelia Voght stays behind to observe. While Thena unites the telepaths' minds, Danny sees White Tiger stalking the Man-Beast and realizes if she attacks, it would endanger Thena and any chance they had of winning.

Quicksilver tries to talk some sense into the Evolutionary and is beginning to succeed when the telepaths' attack strikes.

Danny orders White Tiger not to attack, but she can't help herself and the two fight.

The Acolyte Senyaka seeks Ant-Man's aid in bringing down an atomic steed but Scott devolves and smashes Lord Gator's steed to bits.

The Evolutionary reverts to human and Exodus is prepared to kill him. The Black Knight faces him, ordering him down. Dane reveals that it was not just an ancestor of his whom trapped Exodus in a cave for centuries; it was Dane himself in his ancestor's body. Exodus attacks him.

Man-Beast lets loose a psionic blasts which brings many to their knees. But not White Tiger who then does battle with him. Ant-Man savagely attacks Lord Gator and is held back by She-Hulk and Cage who stop him from killing. White Tiger and Man-Beast's battle becomes more and more bloody. Delphis has stabilized the Isotope and offers it to the Evolutionary offering him the chance to stabilize himself, making himself fully human once more. Dane has defeated Exodus, knocking him unconscious. Man-Beast is defeated and questions whether White Tiger will actually kill him. The Evolutionary appears and uses the Isotope to transform him back into a wolf, with no memory of his life as the Man-Beast. He then turns it on the Knights, whom he had empowered for their battle, returning them to their normal station. He then stabilizes the Knights. The Acolytes turn to Quicksilver for direction but he denies their leadership and runs away.

The High Evolutionary offers the White Tiger anything she wants, and she requests to be turned back to her original state. She finds life among humans too difficult, unable to cope with human emotions and interactions. The Evolutionary grants her wish and she becomes a white tiger, unaware of her existence.

The Evolutionary says he'll return her to the rainforest where he found her.

The sceptre of Isotope E is now burned out, the cause of all these problems now gone, destroyed.

Retrieved from "https://heykidscomics.fandom.com/wiki/Heroes_for_Hire_/_Quicksilver_%2798?oldid=1613217"
Community content is available under CC-BY-SA unless otherwise noted.