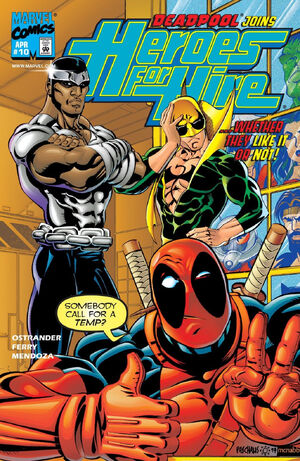 The Master worries that along with the heroes returned, so too, did some of the major villains of their own.

Luke Cage is shocked to hear Danny's plan to bring to K'Un Lun to earth and have the Heroes For Hire act as their knights. Luke is also upset that Danny waited so long to tell him and didn't consult him.

Jim Hammond isn't exactly pleased to hear the news either, but focuses on the mission at hand. Since they're short handed (Black Knight called to the Avengers, White Tiger still at Wungadore, Ant-Man spending time with his daughter) Hammond has called in Colleen Wing and Misty Knight. Hammond gets down to business, their mission is to capture Professor Wolfgang Hessler, a bio-technician/geneticist who's built a powerful bio-weapon and is going to auction it to the highest bidder. The client has requested confidentiality and complicating the mission is the fact that Hessler is in Symkaria under the protection of Silver Sable and a special Wild Pack of Sandman, Paladin, Cat and Nomad. The team is to capture Hessler and return him to the United States so he can't share what he knows. Luke raises doubt over whether the team is capable of handling the Wild Pack. Hammond has arranged for the team to meet a freelance operative at the rendezvous point. The Master hears a report of Danny's plan to bring K'Un Lun to earth and is enraged. The Master comments on the fact that if Danny is the key to bringing K'Un Lun to earth, maybe it would be best if Danny weren't around.

At a private airfield near the Adriatic Sea, Misty, Colleen, Luke and Danny meet up with Deadpool who does his usual shtick before the team takes off in a Kirbyesque plane.

In New York, Scott and Cassie are enjoying a walk through Central Park. Cassie doesn't want to live in the free apartment at Oracle that H4H provided them. She find the place creepy and reveals what really happened with the incident involving the Super-Adaptoid. Cassie had been exploring the complex when she discovered a computer which was monitoring the rising of an underwater city (identical one displayed in the Master's stronghold) when suddenly she lost consciousness and awoke trapped in the Adaptoid. Scott believes her and vows to find out what's going on.

In Symkaria, at an abandoned monastery which is serving as a stronghold for Silver Sable, her Wild Pack and Hessler. Hessler is close to finishing his work and Sable intends to keep him from continuing his work afterward.

Outside the monastery, the de facto H4H team plan to climb up the mountain to the sanctuary but Deadpool uses his teleport to go ahead. He pops in on Nomad and Paladin. He knocks them down and throws down a climbing rope just as Paladin recovers and aims a gun at him. At the base of the mountain, Luke and Danny catch the rope over the sound of gunshots. Paladin and 'Pool each take a couple shots in the chest but are both okay and Nomand turns out to be Madcap! Deadpool tries to kill him, fails, is about to try again when the rest of the Wild Pack show up. As does the H4H team and the two face off.