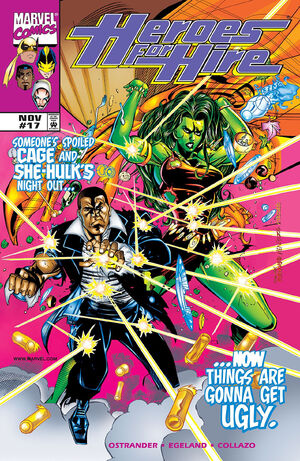 She-Hulk and Luke Cage have been hired by the FBI to deal with a militia group who've gained extraordinary weaponry which the FBI isn't ready to deal with. Luke suggests he and Jennifer go in from opposite sides. Jennifer's upset that Luke takes control and Luke approaches her, claiming she's had an attitude towards him and Scott ever since she came on board. She claims it's because they're ex-cons. Luke makes a deal with her; if he gets to the nerve center first, she'll go to dinner with him and he'll tell her his story and if She-Hulk wins, he'll quit the team. Luke makes a run for it, crashing through the militia's mansion, allowing the leader to be punished by the women he had captured for his harem.

At Oracle, Danny is hanging around the offices, bugging Jim Hammond.

Luke and Jennifer arrive at their restaurant, the Heaven's Grill, in fine style and are seated conveniently out of the view of the other diners. Luke begins to reveal his story.

As a young kid named Carl Lucas in Harlem, he committed some petty crimes and did some time in juvenile hall, but never learned from it. As he got older, he got tougher as the streets got meaner. Until he met Reva. He fell in love and attempted to go straight but his "friend" Willis Stryker set him up on a drug charge, to get to Reva. Lucas got sent to Seagate Prison and Stryker moved in on Reva. Reva, however, was shot by Stryker's criminal competition. Lucas, in prison, was constantly being harassed by a racist prison guard named Rackham. Lucas, so desperate to get out to get revenge on Stryker, volunteered for an experiment which Rackham sabotaged. Lucas went crazy as the chemicals cooked him and he punched his way out of prison. The guards had him trapped on the edge of the island and shot him, where he fell into the bay. Presumed dead, he came up with the identity of Luke Cage and became a hero for hire. He also set out to clear his name and capture Willis Stryker. Both of which he's since accomplished.

Luke and Jennifer then flirt but they're interrupted by the arrival of Titania and the Absorbing Man. The Absorbing Man planned to steal the cash from the restaurant since it's one of the most expensive and elite of the city. But, as maitre d' points out, most rich people use credit cards. He then points out the only celebrities dining tonight, She-Hulk and Power Man. Titania freaks out at She-Hulk and charges. She-Hulk springs to defend herself when her high heel snaps, she loses the heels and starts to fight Titania. Luke attacks the Absorbing Man who absorbs the properties of marble. Luke ducks under Creel's ball and chain, smashing him so that he loses control of his ball and chain which knocks Titania out. She-Hulk and Luke then knock Creel out.

Luke then escorts She-Hulk home and they kiss goodnight.

Retrieved from "https://heykidscomics.fandom.com/wiki/Heroes_for_Hire_Vol_1_17?oldid=1432379"
Community content is available under CC-BY-SA unless otherwise noted.