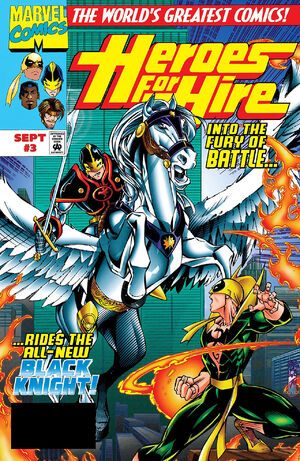 Appearing in "Give and Take"Edit

Synopsis for "Give and Take"Edit

The new Black Knight rides his magical steed, Strider, into battle against Nitro. Iron Fist stands up to Nitro, but even his iron fist is no match for his enemy, though the resulting explosion sends everyone flying. Nitro is about to kill IF when Black Knight steps in to protect him. Nitro attacks the Knight but using his Shield of Night, Dane absorbs the energy of the blow, re-directing it through the Sword of Light to explode the ground beneath Nitro, knocking him out with shrapnel. White Tiger notices that Dane's new armour comes from Avalon when he reverts to his normal form by merely saying "Avalon."

Luke Cage is a captive in the Master's stronghold where the Master reveals his plans to Luke. The Master believes that 70% of the world's population must be eliminated to reserve resources for "those that deserve it." The Master asks Luke to act as his plant in the H4H team. Luke thinks about it.

Back at Oracle Inc, Danny is recovering from his battle with Nitro and has a sparring session with White Tiger. During the fight, Danny provokes Tiger and she transforms into a literal white tiger. Danny calms her down and she reverts to her human form, obviously embarrassed.

Danny is then called to deal with Hercules who is drunk and trashing a bar. Dane goes with him, but is unable to handle Herc. Danny has no choice but to knock Herc out. Later, Herc reveals he feels guilty for not being present when Onslaught attacked and the Avengers died. He decides to take a leave of absence from the Heroes to combat his drinking problem.

When Dane and Danny return to Oracle, Jim Hammond greets them with the newest member of the H4H team - Luke Cage.

Retrieved from "https://heykidscomics.fandom.com/wiki/Heroes_for_Hire_Vol_1_3?oldid=1432365"
Community content is available under CC-BY-SA unless otherwise noted.