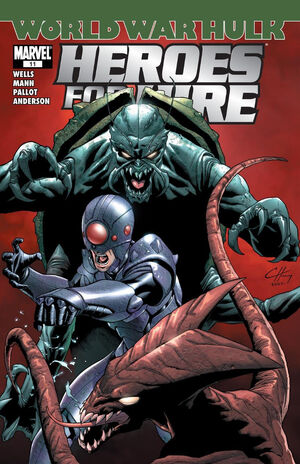 Your only concern, Misty, should be the fact that the last time we left Humbug alone he was decapitated and Orka was slaughtered.

The Heroes For Hire return back from their trip to the Savage Land. They argue about what happened until they make it back to base. There, they have trouble receiving their check from SHIELD who want to deal with the Hulk situation first. The Heroes don't know what's going on due to their earlier mission and are given an update. The Heroes agree to help evacuate Manhattan for free. During the preparations, Tarantula gets into an argument with present SHIELD agent Scorpion, Black Cat argues with a departing Paladin (who refuses to work for free), and Shang-Chi and Tarantula bicker, revealing that they slept together.

When they arrive in Manhattan, the team comes across some weird, alien bugs. Black Cat tries to communicate with them but an oddly behaving Humbug destroys the insect. He spreads its blood across his teammates, giving them the aliens' scent, so they can walk freely among the bugs.

Scorpion travels across the city and stops some robbers. SHIELD gives her another mission to retrieve an item impounded in an evidence warehouse. There, she is confronted by Paladin who wants to turn her in for money. The two fight and Paladin seems to get the upper hand, though Scorpion recovers and points a gun from the warehouse at the mercenary.

Though not directly, this issue ties-in with World War Hulk #1

Retrieved from "https://heykidscomics.fandom.com/wiki/Heroes_for_Hire_Vol_2_11?oldid=1432392"
Community content is available under CC-BY-SA unless otherwise noted.