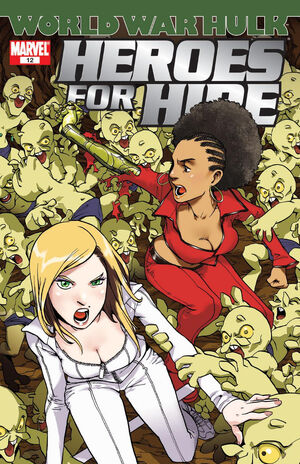 You know what's going on outside? That's a war -- between the Hulk and everybody else! And during wartime, a certain degree of looting is not only expected... it's traditional!

The Heroes for Hire stow away aboard a shuttle full of young hivelings. When the shuttle docks with the main ship, Humbug chems with the Warbound Brood, learning her past. The Heroes confront the Warbound and battle them. Humbug tries to destroy the Brood queen, but finds himself internally conflicted when the Brood offers a home for Humbug. Having chemmed with him, the queen knows the offer is very tempting for the increasingly bug-like Hero...

Scorpion and Paladin fight with several different weapons from the evidence warehouse. Just as Scorpion believes she has defeated him and appears to be carrying out her order to terminate, Paladin turns the tables and pulls a gun on her...

Retrieved from "https://heykidscomics.fandom.com/wiki/Heroes_for_Hire_Vol_2_12?oldid=1486643"
Community content is available under CC-BY-SA unless otherwise noted.