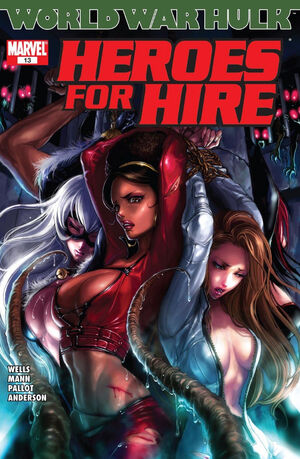 The Heroes are being held and washed to prevent confusion among the hive. Humbug's loyalties seem uncertain as he converses with the Brood queen. In a cell with Black Cat, Misty Knight questions her own choice to lead her team onto a spaceship. Shang-chi, in a cell with Tarantula, explains how passion for women also arouses a passion to kill. Colleen Wing comforts Moon Boy,certain that Humbug will save them.

Meanwhile, as the Brood queen explains to Humbug her plan to creat catacombs beneath Madison Square Garden where his teammates will be tortured by nerve-maggots, Miek bursts in and discovers the intruder. Brood halts his violent reaction, claiming Humbug is the key to making a nest on Earth. Humbug promises to

reveal which of his teammates killed the hiveling. After he blames Tarantula, Colleen Wing tries to take the blame as well, expecting that Humbug's feelings for her won't allow her to be harmed. Humbug however, does not act.

Scorpion remembers how her powers manifested at her homecoming dance, killing her boyfriend Greg and how she learned to control her abilities, even subduing the Hulk. Having never killed since that day, she is reluctant to kill Paladin, even to save her own life. Ayna Sareva pushes her to make the kill as she struggles internally. She finally uses her lethal sting on Paladin, incapacitatin him and proceeds to retrieve the target. Noriko Nagayoshi explains to her that the target is Element of Doom #81, Thallium, which will allow her to poison the Hulk, using his own strength to kill him. After she leaves, Paladin rises and it is revealed that Agent Sareva hired him to test Scorpion's willingness to kill, in order to prove her ability to save New York from the Hulk.

Retrieved from "https://heykidscomics.fandom.com/wiki/Heroes_for_Hire_Vol_2_13?oldid=1432394"
Community content is available under CC-BY-SA unless otherwise noted.