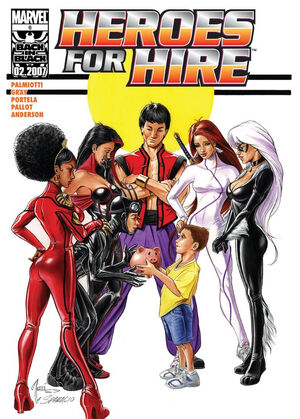 Meanwhile, a young boy named Billy hires the Heroes for Hire to find his missing robot, Victor. Misty assigns Humbug to the case, and the reluctant mercenary chaperones Billy through the streets of New York in search of his robot. The journey ultimately leads them to the lair of the Headmen. Billy's robot is actually one of Doctor Doom's Doombots that has been reprogramed. Now under the command of the Headmen, the Doombot attacks Humbug and Billy.

Elsewhere, the other Heroes for Hire members investigate the Death Cadre activities. They burst into the terrorist faction's headquarters and engage in a mass melee brawl. Soon after, they find themselves squaring off against the true masters behind the recent attacks - the Grim Reaper, the Man-Ape and Saboteur.

Retrieved from "https://heykidscomics.fandom.com/wiki/Heroes_for_Hire_Vol_2_6?oldid=1432387"
Community content is available under CC-BY-SA unless otherwise noted.