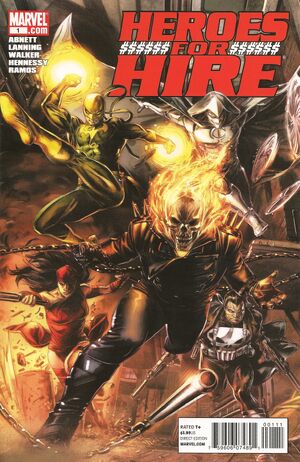 Appearing in "Are You For Hire?"Edit

In the aftermath of Shadowland, Marvel’s greatest street heroes – Punisher, Moon Knight, Shroud, Elektra, Paladin, Silver Sable, Ghost Rider, Iron Fist, Falcon, Misty Knight and more – leap into one all-new series! Who has brought these dangerous loners into one fighting force? How is this network different from all other teams? Who is their first target, and what mysteries wait for them? Discover the answers and enter the action on Marvel’s mean streets, courtesy of fan-favorite writers Dan Abnett & Andly Lanning (THE THANOS IMPERATIVE, PUNISHER: YEAR ONE) and artist Brad Walker (GUARDIANS OF THE GALAXY)!

Retrieved from "https://heykidscomics.fandom.com/wiki/Heroes_for_Hire_Vol_3_1?oldid=1653237"
Community content is available under CC-BY-SA unless otherwise noted.