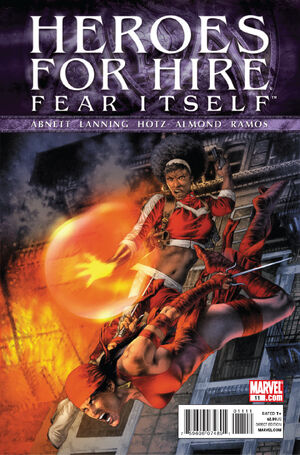 Come on, heroes. We've got to help save this city.

Appearing in "Something to Live For"Edit

On the devastated Raft, the Purple Man unleashes Elektra as his pet killer—with only The Shroud standing in the way! Meanwhile, in the shattered streets of Manhattan, Misty Knight joins cult faves Gargoyle and Paladin to fight the macabre menace of Monster!

Retrieved from "https://heykidscomics.fandom.com/wiki/Heroes_for_Hire_Vol_3_11?oldid=1432407"
Community content is available under CC-BY-SA unless otherwise noted.