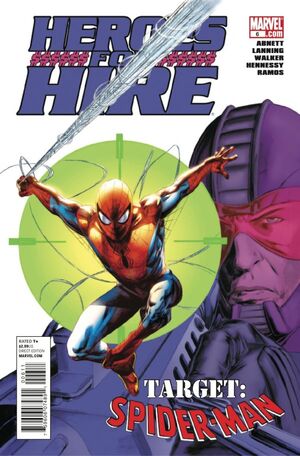 It’s two issues in one month—and both star Spider-Man! Which Captain America foe is kicking Paladin's teeth in? Will the wall-crawler help a mercenary? And is Spider-Man for hire? Find out as the mysteries from the opening issues collide in the new story arc of the book that IGN.com calls “a wholly successful debut…with panels that pop off the page!”

Retrieved from "https://heykidscomics.fandom.com/wiki/Heroes_for_Hire_Vol_3_6?oldid=1726838"
Community content is available under CC-BY-SA unless otherwise noted.