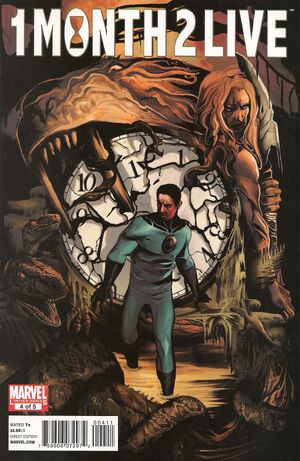 Appearing in "One Month To Live (Week Four)"Edit

WHAT WOULD YOU DO WITH ONE MONTH TO CHANGE THE WORLD? An all-star creative roster brings you a weekly Marvel event! Featuring Spider-Man, the Fantastic Four and the Avengers! In a world of unlikely heroes, Dennis Sykes is about to become Marvel’s unlikeliest. Banker by day, struggling parent by night – and unhappy about it all. But when a tragic turn of events gives Dennis a 30 day death sentence, he discovers his accident comes with super-powers. And as the weeks in Dennis’ life tick down, he sets out to leave a mark one way or the other - - even if he has to go through Spider-Man, the Fantastic Four and the Avengers to do it. Everyone is the hero of their own story…but not every hero is a good guy.

Retrieved from "https://heykidscomics.fandom.com/wiki/Heroic_Age:_One_Month_to_Live_Vol_1_4?oldid=1723689"
Community content is available under CC-BY-SA unless otherwise noted.