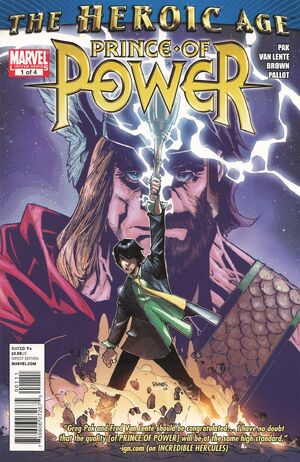 Appearing in "Blasphemy Can Be Fun"Edit

THE HEROIC AGE IS HERE The Lion of Olympus has fallen. And as the Heroic Age dawns, the Golden Mace of Hercules passes to a new Prince of Power...who just happens to be Herc's best friend, Korean-American kid genius, Amadeus Cho. But when Amadeus finally reveals what he plans to do with his new power, the heavens themselves may shatter as Marvel's mightiest pantheons are shaken to the core! And wait a minute...what's THOR doing on the cover of this book? Fan fave writers Greg Pak and Fred Van Lente and beloved "Thorcules" artist Reilly Brown bring the thunder with the next essential chapter in the mind-blowing, heart-wrenching, and gut-busting epic that is the "INCREDIBLE HERCULES" experience!

Retrieved from "https://heykidscomics.fandom.com/wiki/Heroic_Age:_Prince_of_Power_Vol_1_1?oldid=1657693"
Community content is available under CC-BY-SA unless otherwise noted.