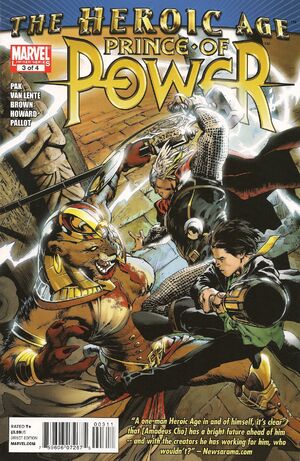 Appearing in "Our Lady of Slaughter"Edit

It's a race against time -- and eternity! -- as the Mighty Thor and Amadeus Cho try to beat the nefarious PANTHEON to all the pieces of The Ultimate Boon! The next stop on their mythological mystery tour is the realm of the ancient Egyptian gods -- and a no holds barred slugfest with SEKHMET, Goddess of Destruction! But once the sand settles, will the Prince of Power continue to side with the God of Thunder -- or with humanity? Join the New York Time Bestselling authors of INCREDIBLE HERCULES as they continue the tale of Herc’s former protégé!

Retrieved from "https://heykidscomics.fandom.com/wiki/Heroic_Age:_Prince_of_Power_Vol_1_3?oldid=1651450"
Community content is available under CC-BY-SA unless otherwise noted.