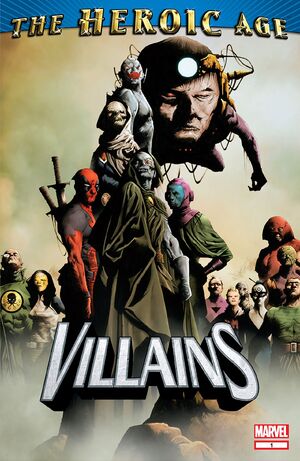 Under the guidance of Steve Rogers, Earth's heroes are at an all-time high but that doesn't mean the villains are taking it lying down! Get inside Steve Rogers' secret files as he analyzes evil from the cosmic menaces of Thanos and the Cancerverse, to the arcane might of Hela and Black Talon, to the armies of Leviathan and Hydra, to the costumed escapades of Deadpool and the White Rabbit! It's 64 fact-filled pages of the worst men and women the Marvel Universe can offer!

Retrieved from "https://heykidscomics.fandom.com/wiki/Heroic_Age:_Villains_Vol_1_1?oldid=1432532"
Community content is available under CC-BY-SA unless otherwise noted.