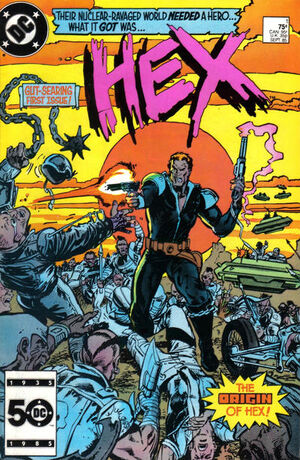 Jonah Hex suddenly finds himself transported to a strange new world. At first, he believes that he is still in a saloon in Red Dog, preparing for a gunfight with Brett. When his old foe El Papagayo barges through the door, Hex guns him down, only to discover that his adversary is in fact a robot.

Jonah runs out the front door and discovers that he is trapped inside of a large scientific research station in the future. The administrator of the facility is Reinhold Borsten, a cruel, analytical man, who takes responsibility for transporting Hex from the 19th century into the mid 21st century. Jonah fights past a few of Borstens' guards, but they ultimately capture him and place him into a prison capsule.

Jonah manages to break free of confinement and escapes from the station. He races out into the desert, where he encounters several thugs beating up on a young woman. Jonah saves her life, and finds that her name is Stiletta – a member of a desert gang known as the Road Reapers. Stiletta introduces Jonah to her friends, and tells him of their plan to steal supplies of water from Borsten's crew. Jonah begins to suspect that he may have allied himself with the wrong side.

Borsten sends a squad of soldiers to take down the Road Reapers. He quips that one of the Reapers is actually a spy for his organization. A firefight ensues and Jonah finds himself caught in the middle. He and another Reaper named Falcon hole up inside of a tank and keep several of the marauders at bay. When they emerge, Falcon betrays Jonah and attempts to leave him in the desert for dead. Jonah fights back, and manages to defeat Falcon. He takes his coat and hover-cycle and speeds off into the sunset.

Retrieved from "https://heykidscomics.fandom.com/wiki/Hex_Vol_1_1?oldid=1664160"
Community content is available under CC-BY-SA unless otherwise noted.