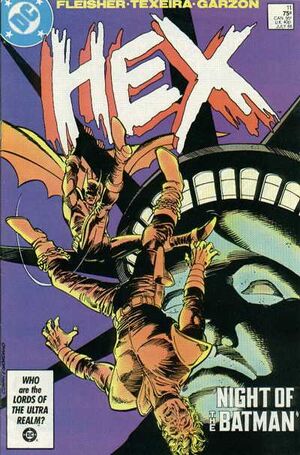 I created my own Bat-costume, equipping it with special features suitable to this place and time. And in memory of my parents, I made a solemn vow. I vowed that, as long as I live, there will be no firearms allowed in New York. And if the Combine, or anyone else, tries to stop me from keeping that vow, God help them!

Appearing in "Night of the Bat"Edit

Synopsis for "Night of the Bat"Edit

Retrieved from "https://heykidscomics.fandom.com/wiki/Hex_Vol_1_11?oldid=1664183"
Community content is available under CC-BY-SA unless otherwise noted.