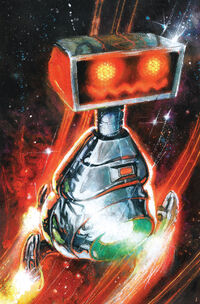 I'm H.E.R.B.I.E. The robot with sass that kicks fleshy ass.

H.E.R.B.I.E. was created by Mister Fantastic and Master Xar of the Xandarians, who hoped that the robot could aid their search for Galactus, who they sought for aid in defeating the villain known as the Sphinx.Empty citation (help)

What neither of the creators realized; however, was that Doctor Sun, an enemy of Master Xar who had his consciousness trapped within Xandarian computers, was able to escape by jumping from the computer to H.E.R.B.I.E.'s body. The little robot was his sleeper agent, whom he could control whenever he wished. Although an alien pirate mysteriously died in H.E.R.B.I.E.'s presence, and the villain Blastaar suddenly escaped from the Negative Zone, nobody suspected that H.E.R.B.I.E. was responsible.Empty citation (help)

After Sun's attempt to assassinate the Fantastic Four with Blastaar failed, Dr. Sun revealed himself at last, trapping the Invisible Woman and the Human Torch within the Baxter Building's security system and besting Mister Fantastic and the Thing with H.E.R.B.I.E.'s weapons. He then abandoned H.E.R.B.I.E.'s body and transferred his consciousness into the Baxter Building's main computer, which would allow him to control the entire building, and all of the weaponry within. Fortunately, Mister Fantastic was able to lock Dr. Sun away from the rest of the computer system, but H.E.R.B.I.E., now himself again, realized that Dr. Sun could always simply return to his body. Not wanting the villain to cause any more trouble, the little robot heroically threw himself into the computer, destroying it, Dr. Sun, and himself.Empty citation (help)  Other H.E.R.B.I.E. robots were eventually built throughout the years, serving general duties around the Baxter Building. H.E.R.B.I.E. also served as the guardian and companion for young Franklin Richards.Empty citation (help)

Due to the rise of activism for the fight of equal rights for artificial lifeforms, Valeria Richards decided it was just to remove H.E.R.B.I.E.'s inhibitor and language censor chips. As a result, H.E.R.B.I.E. disrespectfully lashed out at the Fantastic Four and left on his own.[6] He eventually joined the A.I. Army, a group of robots that emerged from the rights movement, fighting for the cause of robo-liberation often through terroristic means.[7] H.E.R.B.I.E. was one of the most prominent figures in the A.I. Army until the premier forces of A.I. oppression, Arno Stark and Sunset Bain, were defeated, putting an end to human/robot tensions.[8]