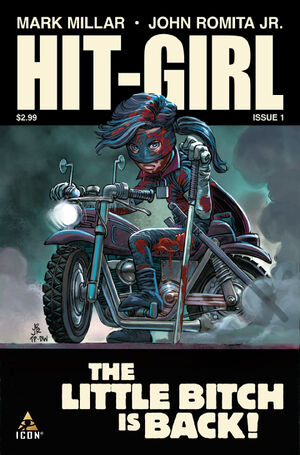 Hit-Girl spins off into her own blood-soaked series by the sales-busting creative team of Mark Millar and John Romita Jr. This story takes place between Kick-Ass volumes 1 and 2 as Mindy McCready tries to settle into life as a regular school-girl, but wants nothing more to be dispensing hot justice to the scum of New York City. Her mother and step-father think she’s doing her homework, but in reality she’s taken Kick-Ass on as her sidekick and training him up to punch, shoot and stab... just like Daddy would have wanted. A limited edition variant by Leandro Fernandez will be released for this issue.

Retrieved from "https://heykidscomics.fandom.com/wiki/Hit-Girl_Vol_1_1?oldid=1435547"
Community content is available under CC-BY-SA unless otherwise noted.