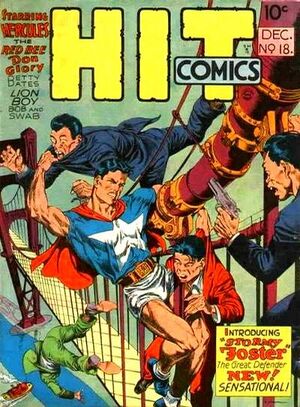 This capsule will give me the strength of ten men!

Stormy Foster, an obscure drug clerk, a bespectacled nebbish, a soda jerk, a delivery man, an apprentice pharmacist, has developed a super-potent vitamin which imbues him with the strength and speed of ten men. (This guy is like the Tick Tock Tyler of Earth-X.) His costume has no mask; he disguises himself by doffing his spectacles and donning a fake mustache. His super-identity, “The Great Defender” has already been established as this first story begins.
-- Several Defense Aides have recently been stabbed (most recently, Mr. Curtis); Stormy sprints to the latest victim’s house, where a sniper shoots at him and misses; t.G.D. returns fire, and does not miss, with a strange weapon of his own devising, a handgun that shoots paralyzing gas. Stormy drags this sniper guy inside Curtis’s house, where he finds Dr. Gilbert Falk; they wait for the thug to regain consciousness then t.G.D. starts smacking some truth out of him, but he doesn’t know much, specifically, he doesn’t know his boss’s name or what he looks like. Curtis meanwhile has died. As t.G.D. steps outside, notorious Oriental spy Oshinto Karu crashes a car into him, but he wrestles it to a halt and snatches Karu out through the window; then 4 henchmen pile out and open fire with revolvers, but they stop firing when he positions Oshinto as a human shield; he then tosses the henchies around like pinwheels but while he does so, Karu gets back into the car and drives away. The Great Defender can sprint at 50 mph, and he soon has leapt aboard the car’s back deck, as the spy drives onto the Harbor Bridge.
-- On the bridge, Oshinto meets and confers with his lieutenant, Mipsa, whose squad has prepared some explosives, to be dropped onto an arriving ocean freighter (bringing Chinese pilots to the U.S. to ferry some bombers back to Chungking). Stormy eavesdrops on these revelations, then after Karu drives away, he pounces on Mipsa, who is immediately gunned down by his own henchmen (4 of them), to keep him quiet. Foster shoots them with his gas gun, paralyzing them; all four fall to their deaths.
-- Stormy returns to the drug store, where Detective Ray Cooper and Ah Choo seem unsurprised to encounter him. He mixes up a new batch of his paralysis gas right in front of them, and reloads his special pistol, then sends Ah Choo to Dr. Falk’s office, to lie to him about having learned some info from the thug that was captured in the story’s first fistfight, and sends Ray to bring a squad of cops to the corner of Bleaker & Pacific Streets. He doesn’t explain what he’s figured out, or how, but they both just follow his instructions. Stormy then sprints to the designated corner, which is a hideout, about which he’s long had suspicions. He crashes in through the oaken door, knocking it to pieces, and inside he finds his four opponents from the story’s second melee; they flee up a ladder through a trapdoor, but he’s able to nail two of them with his gas gun. But he’s not bulletproof, and the spies are shooting at him, so he takes another route to the roof, where they’ve got a machine gun set up, but he paralyses them before they can bring it to bear. Four more knife-wielding assassins jump onto him but he makes short work of them. By this time the cops have arrived, with two paddy wagons; the Defender instructs them to deploy a large life net, then tosses down the senseless victims one at a time.
-- Stormy joins Ray on the street to compare notes; Ah Choo runs up, describing some suspicious behavior of Dr. Falk’s; they all hop into Cooper’s cop car and race over to Falk’s office, break in, and catch Falk packing a bag with expensive gems, ready to flee the country. In an ornate box, they find a bloodstained dagger, which will soon be proven to be the murder weapon that killed the four Lend-Lease Defense Aides. We never learn why Foster thought it would be there.
The next morning, Stormy is back at his mundane job, in his glasses and white sodajerk outfit, washing some test tubes, and chatting with Doc Vaughan.

On a quiet weekend at the D.A.'s country home, Rick Raleigh and the D.A. interrupt an attempted kidnapping of the D.A.'s neighbor, Mary Jellicoe. Rick gets head-konked unconscious with a pistol butt, but Mary escapes, as do the two thugs. The D.A. returns to town, to look up their license plates; Rick changes clothes, explores Mary's house, and attempts to question Mary, who eludes him via a sliding wall panel, and escapes in a large speedboat. The Red Bee runs to the nearest garage, punches out the attendant, steals a car, drives home to his apartment building, on the roof of which he has an autogyro parked. He flies around until he finds the motor launch, which now has six gangsters aboard it, and pancakes his aircraft onto the water in front of the boat. One gangster throws a hand grenade, while t.R.B. swims underwater and boards the speedboat. The thugs had earlier framed Martin Jellicoe, Mary's dad, sending him to prison; they now are harshly interrogating Mary, about some money that is hidden in her house; the Red Bee punches out at least two of them, but numbers prevail. Leaving the Red Bee strung up by this thumbs and Mary tied up, the bad guys open the launch's seacocks and almost escape in a lifeboat. Red gets loose, and releases Michael from his belt pouch; Michael has surprisingly not drowned while our hero was swimming under water. Michael and Red Bee and Mary scramble into the dinghy with the gangsters, all of whom are quickly punched out. The Red Bee forces a written confession from the gang leader, and leaves all of them on the pier, tied to a large bollard.

Joe shows up at a monument factory, dressed in his superhero outfit, and impulsively helps out a couple of workers attempting to move a heavy tombstone, then notices some large welts on their backs. Investigating, Hercules discovers the foreman and manager at the monument works are treating the employees like slaves, taking half their earnings, all unbeknownst to the owner. Violence ensues, during which Hercules bare-handedly breaks an industrial-sized stone-cutting buzz saw off its axis and flings it at one bad guy, and casually shrugs off having a tombstone dropped into his head; in fact, the tombstone breaks into small pieces. One bad guy uses a crane to drop a five-ton block onto Hercules; he easily catches it, and flings it back hard enough to destroy the control cab. A sledge hammer attack and some pistol shooting both fail due to Joe's quickness; then both bad guys are knocked out and dragged away to the owner's mansion. Both are fired on the spot, and physically defenestrated, by the owner and Joe Hercules.

Retrieved from "https://heykidscomics.fandom.com/wiki/Hit_Comics_Vol_1_18?oldid=1382439"
Community content is available under CC-BY-SA unless otherwise noted.