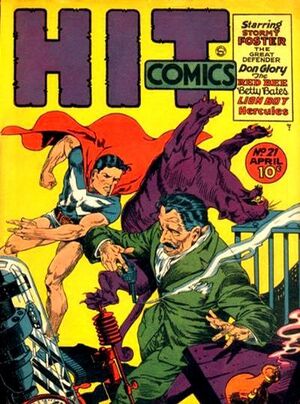 Goodbye, Sir. I'll do all I can to help.

Count Manfred Von Grebe, a ruthless Prussian engineer, with a monocle, has leased King Korman's Castle, on a barren canyon rim in Death Valley California, from its very eccentric, gnarled, wizened, prospector owner. While Korman stays around and plays an immense pipe organ and contributes virtually nothing else to the plot, Von Grebe has harnessed several natural steam wells in the vicinity, to generate five million kilowatt-hours per month of electric power, which he then, by a secret process, uses radio waves to transmit back to arms factories in the Fatherland.
-- Not far away lives elderly rancher Luke Taylor who one day orders a prescription delivery from Vaughan's Cut Rate Pharmacy; Stormy Foster and Ah Choo drive out into the desert to make the delivery. Along the way they find a wounded elderly prospector near King Korman's castle; he's been just randomly shot by the villains inhabiting that place, and he dies shortly after being found. Ah Choo drives on to complete the delivery while Stormy resolves to get to the bottom of this murder. He super-vitamins up and changes clothes, and loads his strange handgun with paralysis gas tubes, then invades the castle, encountering a series of armed thugs several spring-loaded iron gratings, a heavy machine gun, crazy old King Korman, two giant pumas, and Von Grebe himself, dealing with each in one way or another. Meanwhile at old Luke Taylor's house, Ah Choo has learned what a dangerous place the castle is, and he drives back there, to join the fight with his slingshot. One thug tries to whack Foster with two lightning electrodes, but these get flung into Von Grebe's generator, shorting out the apparatus and sending live steam and electric sparks all over the place. Ah Choo escapes from all this and finds Stormy waiting in the car, with tied-up Von Grebe in the back seat; closing dialogue indicates that Ah Choo still doesn't know about Stormy's secret identity.

Synopsis for The Red Bee: "Blacky Meyer Is Back In Town"Edit

Blacky Meyers completes his prison sentence, returns to Superior City, regains control of his old mob, and goes back into the extortion business, shaking down big department stores. Assistant District Attorney Rick Raleigh, accompanied by no policemen, waits around in one store's general manager's office until a thug arrives to make demands. He beats up the thug, who reports back to Blacky, then returns with Blackie and two more goons. They are met by the Red Bee, mayhem ensues. Blackie's girlfriend Mae Floss, posing as a frightened shopper, gets behind t.R.B. and knocks him unconscious; they handcuff him and bring him to the manager's office and resume where they left off shaking down the manager. Red Bee recovers consciousness and releases his trained bee Michael, who unlike normal bees is able to inflict multiple stings; meanwhile the manager uncuffs t.R.B., who pummels the bad guys until they flee. As they drive away, Michael the bee gets into their car and attacks the driver, causing the car to crash into a nearby laundry; police arrive and quickly apprehend all the criminals.

Joe Hercules wanders into a circus side show, wearing his superhero costume, encounters a wrestling-ring strongman (Bozo), dislikes his attitude, accepts his $100 challenge, and easily defeats him. There's not even any discussion of him collecting the prize before a lovely young lady (Laura Nichols, trapeze performer) approaches him, and introduces him to her father (Daniel Nichols, circus owner), who tells him about his big problem, which is that the circus is being shaken down by a mob (Red Jake Mazola's gang) who collects 3/4ths of the gate receipt every night. The Ringmaster (Serpente) and Bozo are working with the gang; they try to take out Hercules by flinging a fuel-soaked rope net over him and igniting it. This problem is so trivial for Hercules that he escapes it off panel with no explanation, then runs into the big top just as Serpente orders a corrupt rigger, with a fire axe, to chop the support cable suspending Laura's trapeze; she hurtles toward certain death, but is caught by Hercules. Serpente runs away to a corner of the circus grounds where four elephants are practicing, grabs a prod and gets aboard Rogue, the lead elephant. After a short fight, Hercules has toppled the elephant onto the ringmaster. In Joe's opinion, the elephant is only shaken, and Serpente will survive to serve a jail term, and the owner can thank him by providing free circus tickets to local poor kids.

Retrieved from "https://heykidscomics.fandom.com/wiki/Hit_Comics_Vol_1_21?oldid=1385226"
Community content is available under CC-BY-SA unless otherwise noted.