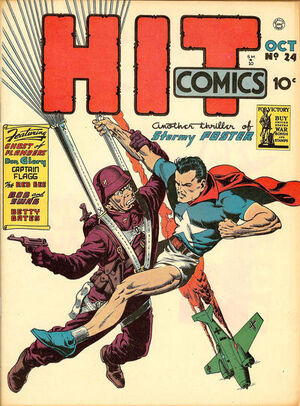 This is the last hijacking job you boys'll ever do!

Appearing in Stormy Foster, the Great Defender: "The General's Briefcase"Edit

Synopsis for Stormy Foster, the Great Defender: "The General's Briefcase"Edit

Right in front of Vaughan's Cut Rate Drug Store, some Nazi spies crash their car into an army general's car, flipping it on its side. The general's driver, Miss Jean Dale (Women's Army Motor Corps), runs in for some smelling salts and bandages; Stormy Foster and Ah Choo rush out to help. The general's briefcase is missing; one witness saw which way the case-grabber went. Stormy in his soda-jerk uniform races out into heavy traffic, takes a super capsule, changes clothes somewhere between panels, and the Great Defender sprints around the street, peeking into cars. The getaway-driver spy spots this activity, and tosses the empty but incriminating briefcase out the window, then escapes anyway. Soon Jean and Stormy are commiserating about events and starting to really like each other, when Dr. Vaughan has some news and an idea.

A delivery order for some iodine has just come in from "the old Ridge house," which is known to have been abandoned for several months; Ah Choo is sent to make the delivery and snoop around. As Vaughan reminds us, "... iodine is often used to bring out secret writing." At the hideout, Ah Choo peeps thru the window as the spies pore over some plans, but he's spotted, and the windowsill is electrified, and the lad is jolted unconscious, then, apparently, is just left out on the lawn unkilled, untied, and unguarded.

Eventually Stormy decides that Ah Choo has been gone too long, and goes to investigate, stopping along the way to vitamin up and change clothes. Soon Jean decides that Foster has run into trouble, and she also goes to the Ridge house, where she finds The Great Defender administering artificial respiration to the still-unconscious Ah Choo. (This was 1942-style pump-action artificial respiration; mouth-to-mouth hadn't been invented yet.) Jean takes over, freeing up t.G.D. to search for clues. He finds that the spies have left behind all their paperwork; he examines it, and figures out that a secret troop embarkation, scheduled for that very night from Piers 7 & 8, is marked for sabotage! Fortunately the railroad tracks run right past the Ridge house, and even more fortunately, the troop train racing towards the waterfront is approaching just at that moment. The Great Defender cleverly flattens himself between the rails and lets the train run over him, then grabs some undercarriage rods and rides along to the piers.

The Defender spots flames on one of the many oil-treated pilings that support the pier; he dives down and punches that piling loose from the pier; the fire fizzles out before it can spread. Spotting a speedboat racing from the scene, he swims after it and catches it, climbs aboard, and fights with three or more enemy agents, until some motorized armor plating is deployed, sheltering the bad guys inside it and knocking the Defender overboard. The launch transforms into a miniature submarine and dives, staying down for fifteen minutes. But Stormy's lungs are super-vitamined, and he stays down with the craft, and when it resurfaces under the pier, he boards it and punches out the small crew, then turns them over to a dock guard.

Meanwhile at the old Ridge house, Ah Choo regains consciousness, and he has important knowledge about the spies' back-up plan! Jean drives him to the docks, where they encounter the Great Defender. Ah Choo either doesn't recognize him as his friend Stormy Foster, or pretends to not know, but he describes the enemy plan. The troop transport ships will be sailing past a headland with an underground conduit outlet, from which the enemy will open fire on the ships. But what he finds there is even crazier, a giant spinning drill-bit shoots out of the pipe, right towards the lead ship, but the Great Defender dives onto it and deflects it into the riverbed below. He then climbs into the conduit, and it's not clear how many Nazi spies are lurking there, but it is quite clear that there are not enough of them to stop the Great Defender. He punches them all out and drags them to the spot where the dock guard is guarding the first pile of knocked-out spies.

The next day, at Vaughan's there's a conversation revealing that Miss Dale may kind of like Stormy Foster, but doesn't think much of the Great Defender, considering him "just an overgrown strong boy."

Appearing in The Red Bee: "The Drug Hijackers"Edit

Synopsis for The Red Bee: "The Drug Hijackers"Edit

Truckloads of precious drugs, needed at the battlefront, are being hijacked by mobsters. Assistant District Attorney Rick Raleigh decides to ride along with the next shipment, and tells his boss about this plan. A week later, there's another hijacking, only now the Red Bee jumps out of the back of the truck, and beats up two pistol-packing thugs, while a third sneaks up behind him and knocks him unconscious with a pistol butt. The driver takes advantage of this distraction to continue his important wartime mission, driving quickly away. Alas, the bad guys know his destination; these drugs are shipped abroad from Central General Hospital; the hijackers rally up and drive in pursuit. Some time later the Red Bee picks himself off the ground, sees everybody gone, figures out where they went, and hitches a ride to the hospital, (where he probably should be going anyway, with the recent concussion he's just received). At the hospital, he finds the hijackers in a store room and attacks them, but a chloroform-soaked cloth is clapped over his nose, and he falls down unconscious. The chloroformer and hijack-boss turns out to be Dr. Williams, who now plans to do some impromptu surgery to t.R.B., but a nurse has overheard his plans; she runs outside to summon some cops. The Red Bee wakes up on the operating table, releases Michael the bee, who distracts Dr. Williams long enough for the masked man to punch him out. The three thugs charge into the room; he punches them out also, then leaves the scene, changes clothes, and returns as Rick Raleigh to discuss the case with the very pretty nurse. [speculation: Unless Rick Raleigh keeps a spare set of clothes stashed in Central General Hospital, then he was wearing that business suit under his very tight Red Bee costume through most of this story.]

Retrieved from "https://heykidscomics.fandom.com/wiki/Hit_Comics_Vol_1_24?oldid=1402559"
Community content is available under CC-BY-SA unless otherwise noted.