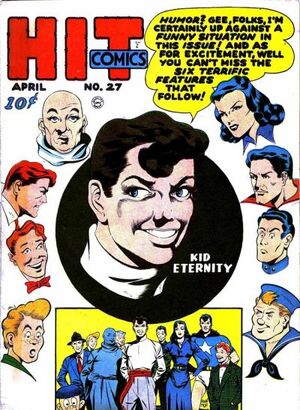 Appearing in Kid Eternity: "Silk and Her Highness"Edit

Synopsis for Kid Eternity: "Silk and Her Highness"Edit

Synopsis for Stormy Foster: "The Four Feathers of Death"Edit

The Great Defender encounters and defeats the only costumed foe of his career, The Archer, by punching him through a window. He falls to his death.

Retrieved from "https://heykidscomics.fandom.com/wiki/Hit_Comics_Vol_1_27?oldid=1531461"
Community content is available under CC-BY-SA unless otherwise noted.