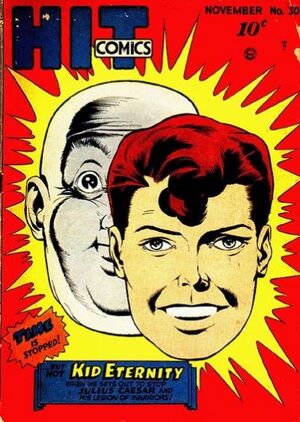 I'm going to die soon! You can have my brain for one thousand dollars!

Synopsis for Stormy Foster: "The Reanimation of Matilda"Edit

Ah Choo plays dice with his friend Asbestos, and loses all of his money and most of his clothes. Asbestos then accompanies him on a pharmacy delivery to a rickety old scary house at the top of a tall scary hill. A mad scientist lives there, raving on and on about how he needs to revive his lovely Matilda, and he catches Ah Choo and ties him to a chair, while Asbestos runs away, to Vaughan's Pharmacy, where he tells Stormy Foster about it. Stormy gets super-vitamined up, and Asbestos definitely observes him do so. Meanwhile at the scary old house the crazy old scientist has now convinced himself that, for crazy reasons, he needs to kill Ah Choo with a big old knife, but just then The Great Defender crashes onto the scene and there's a scuffle, and the old madman momentarily seems to be knocked out but then he flings some chemical potion onto the good guys, which knocks out Stormy. He decides to use Foster's blood in his next experiment. Meanwhile back at Vaughan's, Asbestos has an attack of conscience, and he returns to the scary house, and fools the crazy scientist into thinking his Matilda is alive. Matilda turns out to be a withered potted plant, which Ah Choo revives with tapwater, prompting the still-unnamed madman to tip the kid enough loose change for him to pay off his gambling debt to Asbestos, while t.G.D. takes the old loon into custody.

Retrieved from "https://heykidscomics.fandom.com/wiki/Hit_Comics_Vol_1_30?oldid=1557376"
Community content is available under CC-BY-SA unless otherwise noted.