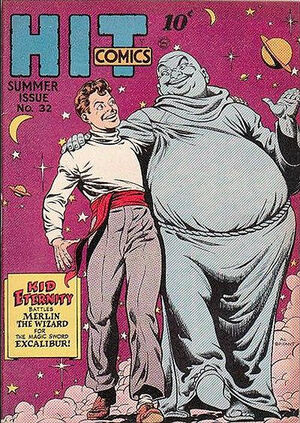 A blast of lightning sends Plastic Man back to Police Comics, and calls forth ... ... KID ETERNITY, the world's most remarkable boy!

Appearing in "Kid Eternity battles Merlin the wizard for the magic sword Excalibur!"Edit

Synopsis for "Kid Eternity battles Merlin the wizard for the magic sword Excalibur!"Edit

The wealthy Wolfton family is dying off very rapidly. Stormy Foster and Ah Choo deliver an oxygen tank to their mansion, and become suspicious. The butler turns out to be in on the murder plot, the doctor looks likely to be in on it and then turns out to not be, and Jim Wolfton's twin brother Tom turns out to be behind it.

Retrieved from "https://heykidscomics.fandom.com/wiki/Hit_Comics_Vol_1_32?oldid=1582500"
Community content is available under CC-BY-SA unless otherwise noted.