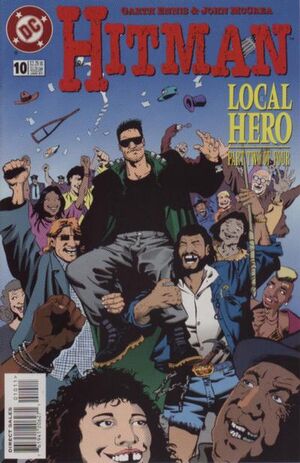 The Gotham City police are moving in on Tommy's apartment. Tommy startles them with a dud grenade, giving him enough time to hold the SWAT team leader hostage. Tommy learns from the officer that Detective Burns ordered the operation and that the team was given orders to kill him and make it look like he was resisting arrest. Tommy walks out with the SWAT leader and forces the officers to drop their weapons, his X-ray vision allowing him to see snipers in the building across the street. A crowd of Tommy's neighbors has formed during the siege, and they cheer Tommy as he and the SWAT leader escape in a police vehicle.

At the precinct, Detective Burns presents the news of Tommy's escape to Mr. Truman and Mr. Feekle. Mr. Truman demands control of the Cauldron in order to take down Tommy, and Feekle requests the privilege of killing Tommy himself. Truman orders an agent named McAlister to start the search.

Tommy is fleeing the police with his hostage, who begs him to stop the speeding vehicle. But they are T-boned by Tiegel, who takes Tommy into her car and speeds away. She takes Tommy to her apartment, where he meets her mother and ex-Nazi grandfather. Later, Tommy tells Tiegel about Truman and Feekle and their scheme to get him to work for them. Tiegel convinces Tommy to try to take Truman down publicly and expose his plans.

Tommy calls Sean to let him know he is all right, but the phone is tapped. Feekle tracks the number to a payphone in the Cauldron, and Truman's superhuman agent is sent in to round up Tommy. As Tommy sits on a rooftop musing about the craziness of life, Green Lantern Kyle Rayner shows up, ready for a fight.

Retrieved from "https://heykidscomics.fandom.com/wiki/Hitman_Vol_1_10?oldid=1433990"
Community content is available under CC-BY-SA unless otherwise noted.