Start a Wiki
Part of the 'DC One Million' event 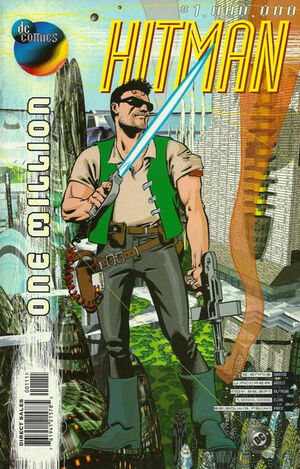 Some day I'm gonna get shot twice in the head when I'm least expectin' it, an' then they're gonna throw my ass in a ditch. An' you know what? So long as I did right by my buddies an' I never turned into a total dirtbag -- I won't care.

Appearing in "To Hell With the Future"Edit

Synopsis for "To Hell With the Future"Edit

Tommy is transported to the 853rd century by a group of kids wanting to access his power using future technology. Tommy kills their cat as he tries to make sense of things. A hero named Gunfire shows up to arrest Tommy for killing the cat and he kneecaps the hero. Gunfire manages to blow himself up and several other heroes arrive. Tommy kills them all. Tommy tells the kids to send him back to his time or he'll kill them too, so they send him back.

Retrieved from "https://heykidscomics.fandom.com/wiki/Hitman_Vol_1_1000000?oldid=1434042"
Community content is available under CC-BY-SA unless otherwise noted.