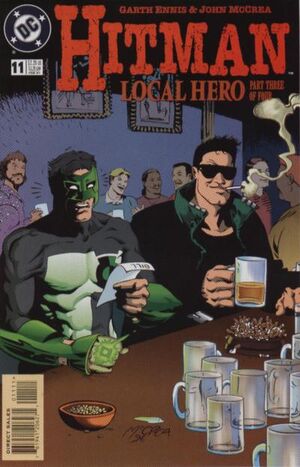 See you tomorrow for the rest of the titanic team-up.

Green Lantern confronts Tommy Monaghan in the Cauldron. Tommy distracts the Green Lantern with repartee while he reads Kyle's mind. Then he tosses a grenade at Kyle and flees.

Kyle catches up with Tommy and chases him into an apartment building where Tommy manages to put a gun to Kyle's head. Kyle tells Tommy a couple government agents told him that Tommy was hired to kill Kyle. Tommy tells Kyle that is a lie and proves it by removing his gun from Kyle's head.

Tommy takes Kyle to Noonan's Bar. Kyle and Tommy have a couple beers and Kyle tells Tommy exactly what happened that led to their confrontation. Tommy listens to Kyle's story then tells him that the agency that contacted him is headed up by a man named Truman who runs a government agency that tries to control superheroes. This group tried to recruit Tommy, to get him to kill people with paranormal abilities and he said no. Now Truman is trying to take down Tommy. Tommy offers Kyle a chance to help take down Truman.

Tommy calls Mr. Feekle and arranges a meet for the following evening. Feekle sends a man to Noonan's bar to pick up Sean Noonan as insurance. Noonan kills the man, as well as the men waiting in the car outside.

Retrieved from "https://heykidscomics.fandom.com/wiki/Hitman_Vol_1_11?oldid=1433991"
Community content is available under CC-BY-SA unless otherwise noted.