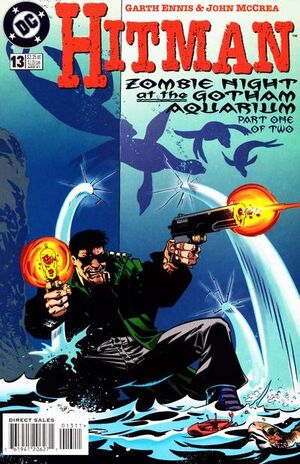 You came to see Billy the killer whale, too, huh?

Appearing in "Zombie Night at the Gotham Aquarium"Edit

Synopsis for "Zombie Night at the Gotham Aquarium"Edit

Tommy Monaghan, Natt the Hat, Ringo Chen and Hacken are playing baseball. Tommy gets a phone call and goes to take it in the alley. Meanwhile, Ringo's beeper goes off. The gang says their goodbyes and Tommy tells Natt he's got a job for the two of them.

The two hitmen meet with a man named Jackson. Jackson tells them that a scientist, Dr. Minett developed a gas that can bring the dead back to life in a zombie-like state. One of the other doctors at the facility where he worked, argued with him about the gas and Minett killed him, stealing the gas.

Jackson hires Natt and Tommy to kill Minett. They decide to check the zoo, figuring it is a place where a scientist would want to try experiments on animals. After the zoo closes, Tommy and Natt break in. Inside the zoo, they find Ringo. It seems he was hired by Injun Peak administrators to do the same job. They decide to team up.

A zombified octopus reaches out and grabs Natt. Ringo and Tommy shoot it into little pieces. Hacken arrives and tells the gang he followed Ringo from the baseball game. They barricade themselves in a shack as they are besieged by hundreds of zombie animals from the aquarium. They begin shooting.

Retrieved from "https://heykidscomics.fandom.com/wiki/Hitman_Vol_1_13?oldid=1433993"
Community content is available under CC-BY-SA unless otherwise noted.